Is my simulation result for unpolarized light correct?

This is a follow-up of this question. After that, I picked up some knowledge of FDTD (an algorithm for solving Maxwell's equations) and simulated following scene:

Here's my simulation result of the light intensity ($|E|^2$) at the plane $100 nm$ away from the tip of the cone for z-polarized light (notice that the z-axis is parallel to the central axis of the cone in my coordinates): 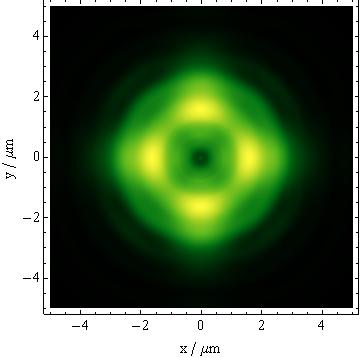 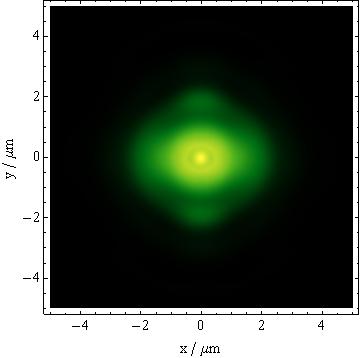 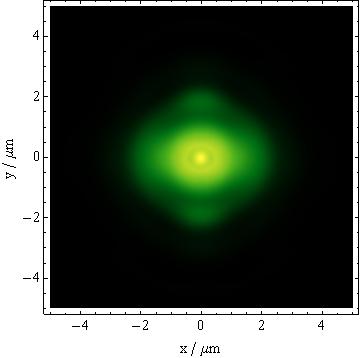 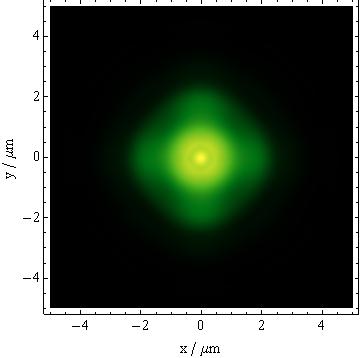 Still, the picture don't have full rotational symmetry, what's more, it's different from the average of the z-polarized and y-polarized one! So I'll get different simulation result for unpolarized light with different average method?

Is my way to "take the average" wrong? Or it's just the truth?

My code isn't contained in this post for its lengthiness. I think it's trivial since it has been checked for times and nothing seems to be wrong.

Any help would be appreciated.

In the comments below, DumpsterDoofus and Ruslan guessed that the PML I used in the model maybe not work as expected i.e. the lack of full rotational symmetry of my image may be caused by the reflection of the boundary I use.

If this guess is correct, the image I get will be different when I change the size of simulation domain, so I tried two more simulation, and the result, in a word, proves negative.

To make the simulation faster, I've chose a smaller cone ($r=\frac{5}{2} μm, h=\frac{5 \sqrt{3}}{4}μm $) this time. Two domains with different sizes (200×200×100 grids and 120×120×70 grids) are used in the two simulations separately. Another tiny change is that this time I've turned to additive source instead of the hard source used in the simulation above. Grid size and the thickness of the PML layer (for this part, see my edit above) remains the same as that of the simulation above.

Here's how the whole domain looks like in the two simulations (the sizes of the cones are same). 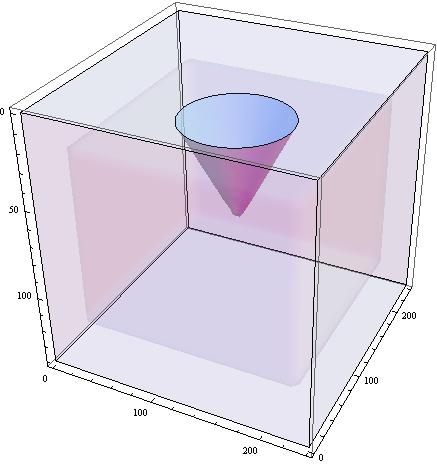 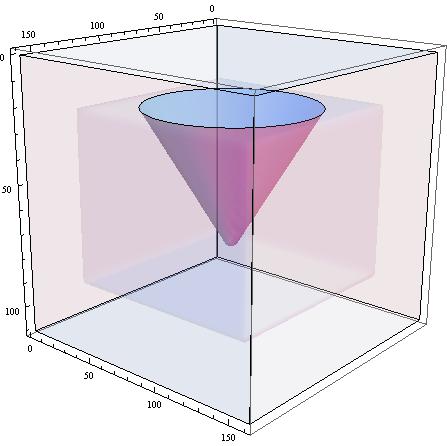 And here's the result (the picture is still taken at the plane $100 nm$ away from the tip): 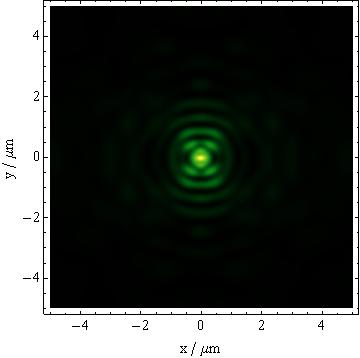 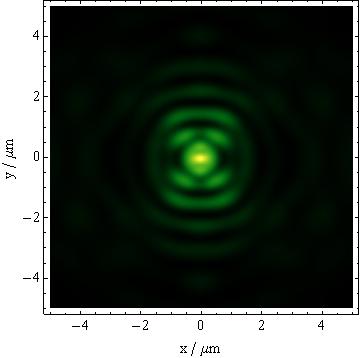 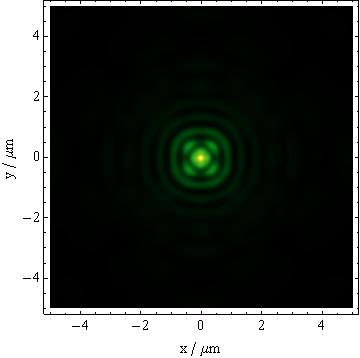 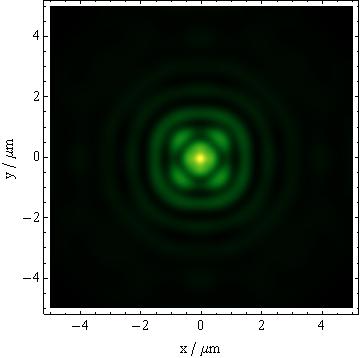 Apparently there is no significant difference except the spot size(Note: I forgot to adjust the DataRange of ListDensityPlot 囧, and I decide not to modify it in the following part of this post), and we still don't have full rotational symmetry.

Ruslan then suggested that the round source I chose may generate unequally widening wave in x and y direction depending on polarization i.e. it maybe not work as expected.

The following picture shows how the whole domain looks like in this simulation (formed with 120×120×70 grids): 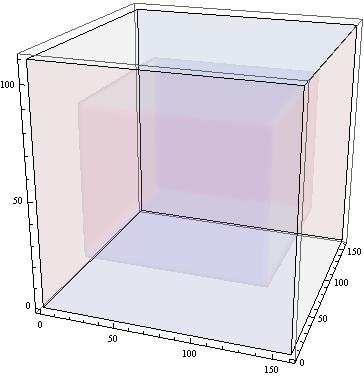 Here's the result (taken at same place as pic 9): 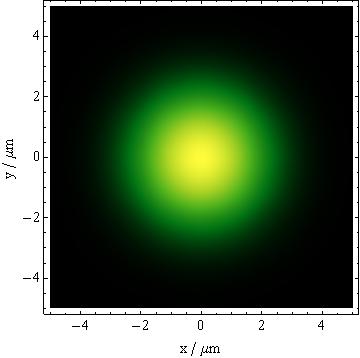 But wait, in Pic 4, OP has already taken an average of all 3 component, why he still can't get full rotational symmetry?

The answer is really simple but easy to ignore: the grid isn't dense enough, so it has formed a not-really-round cone.

After halving the grid size (with other condition remaining the same as Pic 9 and Pic 11), we got the following result:

y-polarized light (with same condition as Pic 9, except for a denser grid): 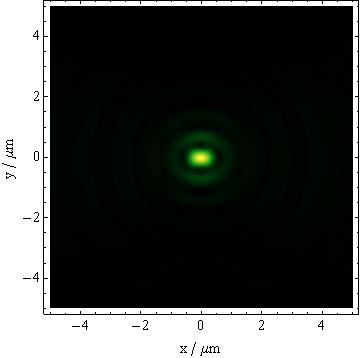 Supposed unpolarized light (with same condition as Pic 11, except for a denser grid): 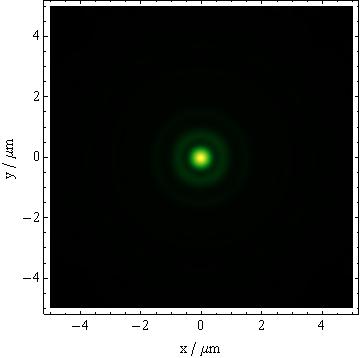 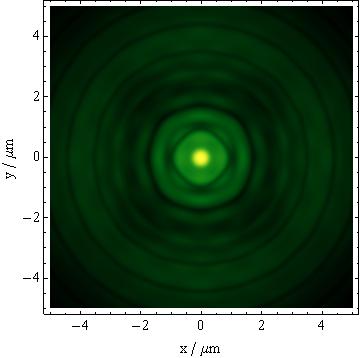 Light intensity here is in fact very weak, the simulation result of passing rate is about 0.08%. BTW, grids for this simulation still seems to be not dense enough, but it's not a big deal.

To avoid any possible confusion, here is a more accurate simulation result of the z-polarized case: 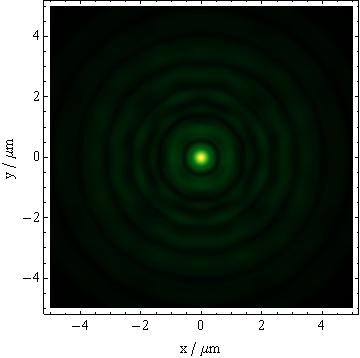 Though still defective, the simulation result almost gains full rotational symmetry, being much better than Pic 16. The passing rate is about 0.04%.

Not the answer you're looking for? Browse other questions tagged optics electromagnetic-radiation polarization maxwell-equations or ask your own question.

4
What electric field vector should I use for modeling unpolarized light?

5
Electromagnetic field of unpolarized light
3
Unpolarized light vs. randomly rotating polarized light?
4
What electric field vector should I use for modeling unpolarized light?
2
How do I convert lux to lumens
2
Best/Most crafty ways to enhance spectrometer data from a mini-plasma generator?
2
Understanding the quantum physics behind light polarization
0
Light intensity through polarizers and a diffuse reflection
0
Unpolarized light, spherical wavelets and Photons