How does a simple weighing balance actually work? [duplicate] 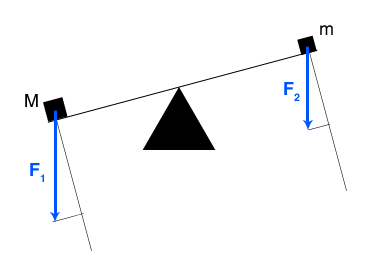 I have made a simple sketch of how I think the system looks like. My problem is:

Now I cannot derive that from the picture. As I see it now, the torques will always be different, no matter at which angle the balance is tilted, since both torques scale with the same sine. This leads to a equilibrium only when the balance is completly vertical (or in my figure pressing against the triangle), which is contra-intuitive. Moreover, when the masses are the same, equilibrium would be obtained at every angle as can be seen from my figure (torques are equal independant of the angle of the balance), which would contradict with the working of a balance.

I see that my question kind of overlaps with this one, but the accepted answer doesn't solve my problem.

(One way to solve my problem, would be to draw a half circle instead of the triangle in my figure, so the lever of the torque becomes a function of the angle. But somehow in my head the schematic drawing of a balance is with a triangle in the middle. Is this perhaps the simple solution I'm looking for?)

Browse other questions tagged newtonian-mechanics classical-mechanics torque equilibrium or ask your own question.

23
Why does the weighing balance restore when tilted and released

23
Why does the weighing balance restore when tilted and released
0
Why can't I calculate center of mass via torque? Results off by a few percent
0
Angular equilibrium on a see-saw
0
Gravitational potential energy on a see-saw
1
Why can an object not be pulled beyond the polygon which is forming from the attachment points?
2
How to solve this problem while taking torques about the lower end of the ladder?
0
Oblique collision problem
0
Why isn't this rod in neutral equilibrium?