Does Light Ever Cease Once Created

I was reading an article on Huffington Post (link to article) about the Multiverse theory. In the article it said this:

The big news last week came from the Background Imaging of Cosmic Extragalactic Polarization 2 (BICEP2) experiment at the South Pole, which saw imprints in the cosmic microwave background—the oldest light in the universe, dating from shortly after the big bang...

I am far from scientific, actually just a web dev, but I have an interest in learning and reading about science, so please explain your answer in a way I can understand it. My question is in regards to the bold type in the quote. Does light ever actually end, go away, or just cease to exist once it is created? Will this "oldest light in the universe" ever completely cease to exist, or does light stay around indefinitely.

Will this "oldest light in the universe" ever completely cease to exist, or does light stay around indefinitely.

Light at the micro level is composed out of photons, the elementary particles of light . In addition to reflections light/photons undergo absorptions when hitting/interacting with matter. Photons can be completely absorbed or change in energy after such a scatter and slowly the intensity of light will diminish. Thus how long a beam of light will survive will depend on the matter found in its path.

The oldest light that we managed to see as Cosmic Microwave Background arrives into our instruments, is measured, and that is the extent of its lifetime , 13,9 billion years according to the prevailing cosmological model. In order to measure it some electrons and atoms/molecules have absorbed it. The same is true of its fellows which were intercepted in their path by the earth.

If the non interacting part will exist until the death of our universe is matter for speculations because there is no standard model on how the universe will end, and there may never be. As long as they do not interact some photons will remain though whether they will still carry a coherent snapshot of universe at the time they decoupled about 380000 years after the beginning, is also a moot point. 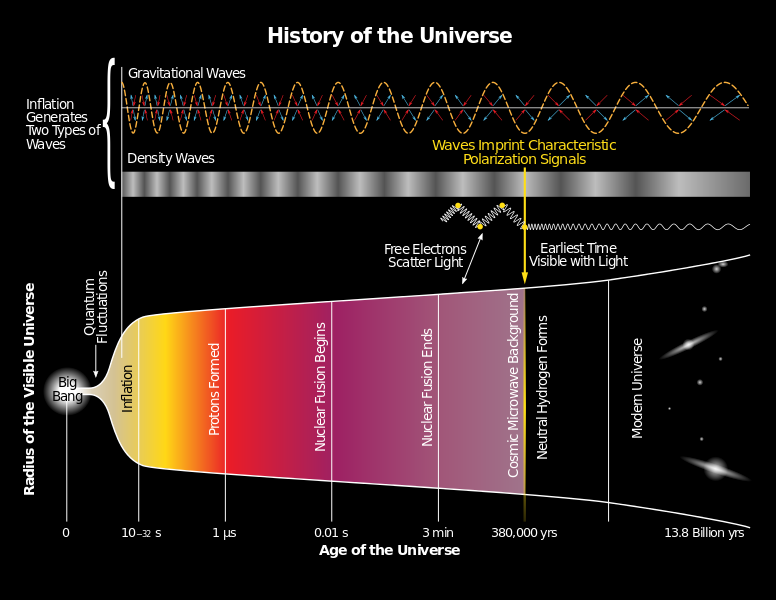 Light is basically just a stream of Photons. I think Photons can cease to exist because when they are absorbed, it's the energy of the quanta that is absorbed. The Photon itself does not exist anymore, Photons can only exist when travelling at $c$. The re-emission means that the Photon is produced again, it's not the same Photon which was absorbed earlier.

25
Telescopes and Time: Please Explain
6
How far can light go?
3
The range of light

4
Can unpolarized light be created from polarized light?
3
How is white light created by complementary colors?
2
How coherent light is created for single slit experiment?
1
Light could travel around the closed FLRW universe precisely once?