Why is water clear?

Water is not transparent for deepUV and infrared. From the evolutionary point of view our eye developed to see electromagnetic radiation present at earth in the past (and now) - deep UV and infrared are absorbed by water vapor and other gasses in atmosphere - so there were nothing to see at these wavelengths.

Here is a nice explanation on why some things are transparent and some are not : http://en.wikipedia.org/wiki/Transparency_and_translucency#Transparency_in_insulators

Basically water is dielectric - and majority of pure dielectrics are transparent. 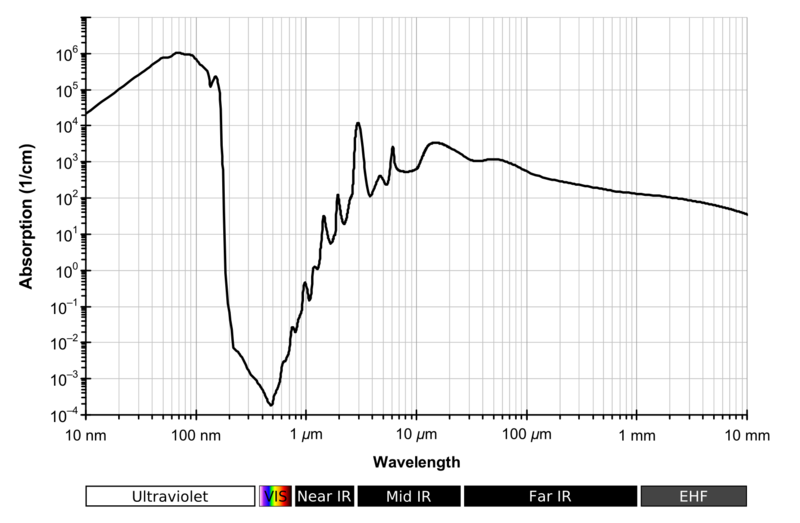 To answer this question we also need to know why some things are not transparent and why certain things, water for example, don't behave in this way.

A substance's interaction with light is all about interactions between photons and atomic/molecular electrons. Sometimes a photon is absorbed, the absorber lingers a fantasctically short while in an excited state and then a new photon is re-emitted, leaving the absorber in exactly the same state as it was before the process. Thus the absorber's momentum, energy and angular momentum are the same as before, so the new photon has the same energy, same momentum (i.e. same direction) and same angular momentum (i.e. polarisation) as before. This process we call propagation through a dielectric, and, by all the conservations I name, you can easily see that such a material will be transparent.

Sometimes, however, the fleetingly excited absorber couples its excess energy, momentum and so forth to absorbers around it. The photon may feed into molecular (i.e. covalent bond) resonances - linear, rotational and all the other microscopic degrees of mechanical freedom that a bunch of absorbers has. The photon may not get re-emitted, but instead its energy is transferred to the absorbing matter. When this happens, the material is attenuating or opaque.

So, BarsMonster's excellent graph shows us where in the spectrum water's internal mechanics tends to absorb photons for good (thus where it is opaque) and where it behaves as a dielectric, simply delaying the light through absorption and re-emission. In a short answer, it is impossible to explain the whys and wherefores of the graph as its peaks and troughs are owing to molecular resonances of very high complexity. The graph is really as good a simple summary as one is going to get.

However, there is one last piece to the water transparency (in visible light) jigsaw that I don't believe has been talked about and that is water is a liquid. This means it can't be rivven with internal cracks and flaws. Sometimes opaqueness is caused by scattering and aberration rather than the absorption I speak of above. This is why snow is not transparent, for example. For light to propagate through a medium with low enough aberration that we perceive the medium to be transparent, the medium must be optically highly homogeneous. This homogeneity generally arises only in near to perfect crystals and in liquids, the latter tend to smooth out any flaws by flow and diffusion and thus tend to be self homogenising. Inhomogeneity is a powerful block to light: the simplified models of Mie and Rayleigh scattering show this decisively.

So in summary, water is transparent at visible wavelengths because (1) molecular resonances and other mechanical absorbing phenomena don't tend to be excited in water at visible wavelenghts and (2) it is optically homogeneous, which property is greatly helped by its being a liquid.

The human eye contains a great deal of water, so it would be difficult to see wavelengths that are absorbed by water. The light that gets to your retina has to pass through water, so the visible wavelengths of light are to a certain degree determined by what water is transparent to.

Electronic energy levels are quantized. The bigger the box the electrons can move in the smaller the energy needed for a transition. H2O only contains 3 atoms (and small ones at that) so the box is small and the transitions are in the UV. The same goes for O2, CO2.

Pure water is transparent because it is a liquid. Objects that are not transparent either scatter light, due to difference in refractive index between air and the substance or they absorb all the photons at the wavelength you are observing. Skin for example is opaque largely due to scattering of visible light.

In fact liquid water is blue if you look through enough of it, such as a metre or more. You can do this easily as an experiment. Molecules absorb energy in the microwave, infra-red and visible and ultra-violet parts of the spectrum. The exact wavelengths vary for every type of molecule as molecules have different shapes, bond lengths and angles and thus the quantised energy levels have different values. Furthermore, symmetry restricts certain transitions between energy levels.

Water thus has rotational energy levels (microwave region) , vibrational energy levels (infra-red wavelength) and ultra-violet transitions. Water appears to be colourless and transparent in the visible, but if you look through a long pat of it it appears to be blue. This is because of weak overtone absorptions of infrared transitions that absorb in the red part of the spectrum, the remaining light transmitted light is blue. If you tried to look through a mile or more of pure water i'm sure that it would absorb all the photons and so appear black.

Not the answer you're looking for? Browse other questions tagged optics visible-light everyday-life water or ask your own question.

0
why light passes through water
34
Why does water have no color?
8
Why aren't there any clear planets/ stars?
3
What is the connection between the refractive index of a material and its transparency?
3
Does time pass slowly in water?

5
Why is the atmosphere transparent in the visible spectrum?
0
How is white light produced from only Red, Blue and Green?
2
Why is a rotor not opaque?
0
Bubbles (water) are transparent, then how can they produce white light in mass amounts?
2
If monochromatic light shines into our eyes, will that activate multiple types of cones or only one type of cone?
0
Pool cover efficiency of absorbing and retaining heat in pool water