About our voice transferred into electrical signal

But my question is: when we speak, our voice not only contains the pitchs, but also the content of our words. How are the words (such as word "hello" and "how are you") transferred into electrical signals?

I am trying to figure out how our voice data delivered as packets on the Internet when we are having voice chat through Internet. What does the packets contain specifically?

Here is an image of the waveform of my voice saying "hello":

The simplest common (digital) way to encode this sound as data is a technique called "Pulse Code Modulation" and this is the format the common "wave" or ".wav" files use. To encode something as PCM, you slice up time into very short intervals and for each interval you record (also called sample) the displacement of the microphone membrane by the sound at that point in time. By reproducing these displacements with a speaker cone the sound is reproduced.

Packets transmitted with this waveform information just contain long lists of number for each value of the displacement of the waveform at that time. No "meaning" is transmitted. Your brain is what interprets meaning from the vibrations.

the pitch of our voice cause the vibration of magnet in the microphone, thus causing generation of different voltages of electrical signal.

this is not exactly true. the voice doesn't have the pitch. the pitch is a concept from a frequency domain. when you speak you change the air pressure over time. these changes travel in air with speed of sound, they hit the mic. mic records these air pressure changes as electrical signals of different amplitude, like show in the picture on top, where i recorded my saying "hello". 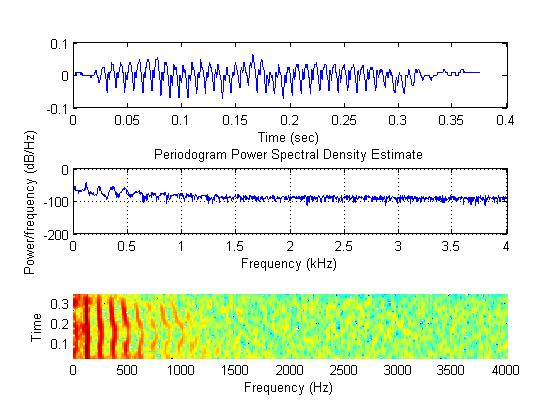 you can run spectral analysis on the entire recording to convert the time domain signal recording into the frequency domain, you'll get the periodogram in the picture in the middle. as you see there is not a pitch there, but rather a continuum of pitches: all frequencies are there, some with higher intensity than others.

you could also argue that the pitch changes with time, and get a spectrogram on the picture at the bottom. it's a sequence of periodograms over time, showing that the frequencies change over time.

basically, all that i'm saying is that the concept of a pitch of the voice is rather complicated. when we speak over the internet phone, the mic records what's on the first picture, and the speaker on the other end tries to reproduce it. in the middle of this all many things may happen, such as compression and encryption. you can lookup the details in documentation for SIP

61
Why does our voice sound different on inhaling helium?
0
How to phrase the question of measuring the frequency of a complex sound?
0
About how much energy is transferred to a guitar when strumming it?
7
Can sound be turned into electrical energy?
0
Where to learn about 'Electrical Sound'?