I'm shocked that there can be an electrostatic calculation that turns out the same regardless of whether the particles are attracting or repelling each other. How do I make sense of that?

The key thing to keep in mind is that Fermi's golden rule describes transitions between eigenstates of some unperturbed hamiltonian, and that these eigenstates are assumed to be orthogonal during its derivation. Essentially, this means that your final state will be something of the form $$ |\psi_i⟩+a(t)|\psi_f⟩, $$ where the relative phase of the two components is crucial to determining the shape of the final wavefunction. On the other hand, this phase is irrelevant as regards the population of the state you're transitioning to.

The state that will be populated the most - at least for small tiltings - is the first excited mode of the waveguide, $$ ⟨x,z|\psi_i⟩ = \frac{\pi^{-1/4}}{\sqrt{4\pi\hbar w}}\frac{x}{w}e^{-x^2/2w^2}e^{ikz}, $$ which has a nodal line down the centre. As you correctly note, the perturbation-theoretic treatment to first order predicts that the same population will be induced on the excited state regardless on the sign of $\kappa$. However, the relative phase of the superposition of the initial and final state will depend on the sign, and therefore the shape of the total state after the perturbation will also change drastically. This is best expressed graphically: 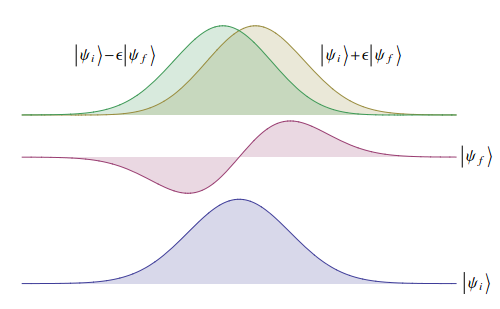 Having done some more-or-less handwavy arguments about this, let me show a bit more accurately how it is that the orthogonality of the states involved results in the independence with respect to the sign of the perturbation. I'm loosely basing my arguments on this text by Emmanuel N. Koukaras, which is a nice exposition of the topic.

Suppose, finally, that you're probing for the probability amplitude for the system to be in some state $|\psi_f⟩$ after the perturbation is over, so that you care about the amplitude $$ ⟨\psi_f|\psi(T)⟩. $$ However, at least for the moment, I will not assume that either the initial state or the final probe state are eigenstates of $H_0$.

We can now put it all together to find the overlap on the desired final state, which is simply $$ ⟨\psi_f|\psi(T)⟩=⟨\psi_f|\psi^{(0)}(T)⟩+⟨\psi_f|\psi'(T)⟩. $$ Note, in particular, that the perturbation to the state, $|\psi'(T)⟩$, is linearly dependent on $W(t)$, which means that it changes sign but not magnitude if you change the sign of the perturbation.

To continue the derivation towards the standard version of Fermi's golden rule, you need to assume that $|\psi_i⟩$ is an eigenstate of $H_0$ and that $|\psi_f$ is some different eigenstate. Under those conditions - and only then - you obtain the result that the overlap $⟨\psi_f|\psi^{(0)}(T)⟩$ vanishes. If you take some other situation, then you will have a second term in your overlap, which means that a change in the sign of the perturbation term $⟨\psi_f|\psi'(T)⟩$ does affect the magnitude of the final overlap.

So, to summarize: if you work out the perturbation theory and allow for non-orthogonal initial and final states, then you get a second term in the overlap which makes the whole thing depend sensitively on the sign of the perturbation. If you don't allow for this, then you do get a transition probability that is independent of the sign of the perturbation, which then impacts very sensitively the phase of the state you transition to. This is the relative phase between the perturbation and the original state, which has a large impact on the shape of the resulting wavefunction. This impact is easy to understand, because the time evolution of non-eigenstates is always encoded in such phases!

Not the answer you're looking for? Browse other questions tagged quantum-mechanics fermis-golden-rule or ask your own question.