What happens when we bring an electron and a proton together?

I have a couple of conceptual questions that I have always been asking myself.

Suppose we have an electron and a proton at very large distance apart, with nothing in their way. They would feel each the other particle's field - however weak - and start accelerating towards each other.

1) Do they collide and bounce off? (conserving momentum)

2) Does the electron get through the proton, i.e. between its quarks?

Here's an analogy:
Physically, this situation is like having a ball at the top of a hill overlooking a valley or well. The ball will roll down the hill and that potential energy is converted into kinetic energy. When the ball reaches the bottom of the valley it will start climbing back out of the well and turn that kinetic energy back into potential, so if the ball starts at rest it only gets back to being as high as it started. However in the real world there is friction that will steal some of this kinetic energy and so the ball will roll back and forth, but eventually come to rest at the bottom of the hill.

For the electron an proton you'll see something similar. The 2 particles will accelerate towards each other, pass/scatter off each other (and then repeat) and will slowly lose energy to "friction" i.e. to radiation.

1) Do they collide and bounce off? (conserving momentum) 2) Does the electron get through the proton, i.e. between its quarks?

The collision between the two particles is perfectly elastic. In addition the energies (~13eV) are so small relative to the strong force holding together the proton that quarks are not involved in any way, and the scattering is described by Rutherford scattering.

The 2 particles will radiate and lose their kinetic energies. The term Brehmsstrahlung is generally reserved for much higher particle energies (>keV), and much larger accelerations.

You can immediately describe the 2 particles by their center of mass description (an atom) plus their individual attributes (i.e. what the particles are doing within the atom). Assuming the 2 particles start off at rest, then they are in a bound state already because they can't escape each other (go off to infinite separation) due to lack of energy.

However the atom will not be in it's ground state until it has decayed into the lowest level via spontaneous emission of radiation.

The TISE of the atom itself will give you energy levels etc, but you will not get spontaneous emission into the ground state unless you put it in by hand (and it would not be time independent anymore) or also quantize the EM vacuum (which is how you derive SE). So trying to solve it would be like solving the ball moving on the hill while ignoring friction, it will just oscillate at constant energy forever.

Check this link here. This is a quote from the website:

When an electron falls from infinity towards a proton it acquires 13.6 electron Volts of energy to reach the ground state “orbital” around the proton. I have always wondered why it does not go all the way. Apparently, its Debroglie wavelength has to fit” around the “orbit radius” for it to occupy a stable state. Perhaps another explanation is that an electron can only arrive in an atom and occupy an orbital by dissipating its arrival energy in the form of a photon.

I believe they would emit Bremsstrahlung as there is acceleration involved, but the electron will still end up gaining 13.6 eV of energy anyway.

In the second case, the electron is inside a potential well, and will stay confined, thus creating an atom. Solving the TISE is very useful in this case.

To provide a graphic version of Punk_Physicist's answer, we have the Feynman diagram for that particular interaction: 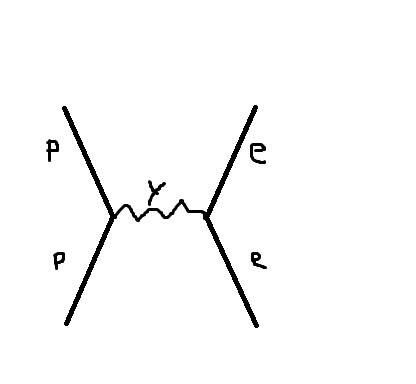 This diagram evolves in time from bottom to top, ie take a piece of paper, and run it upwards along the diagram to see how the system evolves. We have an electron and a proton coming towards each other, then we see them interact by releasing a $ \gamma $ particle, ie a photon--electromagnetic braking radiation (See Bremsstrahlung). The energy of this photon is of course the kinetic energy lost by the electron passing by the proton. The closer they pass, the higher the potential, the greater the loss in $ E_k $ of the electron.

In nuclear fussion electrons and protons can fuse to form neutrons with the release of photons.

To rephrase: an electron approaches an cation.

Most likely result: a photon is emitted and the electron is captured.

Not the answer you're looking for? Browse other questions tagged quantum-mechanics electrons atomic-physics or ask your own question.

189
Why don't electrons crash into the nuclei they "orbit"?
2
Can an electron be inside a proton?
1
How exactly do protons and electrons interact with each other?

4
What happens where an electron is annihilated by a spontaneously generated positron-electron pair?
13
Electron as a standing wave and its stability
6
Formation of a hydrogen atom from a proton and electron - detailed quantitative description
2
Photon emission between an electron and positron
1
Radiation issues dealing with the formation of Hydrogen from an isolated proton and electron
1
Multi electron interference in double slit experiment
0
When 1 proton and 1 electron become an hydrogen atom?
2
What evidence is there for the gravitational acceleration of a free electron?