Why are non-horizontal levers not considered to be in equilibrium?

An unknown mass is placed on the left pan, and the provided weights are moved on the right until the lever arm comes to rest at an exactly horizontal position, as indicated by a line on the rightmost tip of the lever arm. Often, when I'm using the device and I'm close to the equilibrium point, the lever arm will come to rest slightly higher or lower than horizontal, so I'll adjust the weights accordingly until the lines align perfectly.

However, I don't see why the arm must be perfectly horizontal to read an accurate value. Isn't a stationary lever -- no matter what the angle -- an indication that there is no net torque on the system? If so, wouldn't that demonstrate that the masses are balanced in an appropriate way?

In other words, why doesn't a lever which is stationary in a non-horizontal position remain stationary when placed horizontally (and vice versa), since the net torque is zero in both cases?

On a well designed balance scale, the center of gravity of the beam or lever arm will be just slightly below the center pivot point.

If the beam is not level, the center of gravity will be to one side or the other of the pivot, and will thus create torque as it tries to move directly below the pivot point.

The distance between the pivot point and the center of gravity of the beam will determine the scale's sensitivity, ie.. the closer the CG is to the pivot, the less torque it will apply when it is out of alignment, and the smaller the difference the scale will be able to detect.

There are no springs, or magnets that cause this effect, just gravity at work.

(NOTE: This is not a definitive answer and is largely guesswork, but it might be useful for further answerers.)

At first I suspected it was some sort of weak spring or magnetic device which applied an opposing torque to the arm, so as to make the center reading unique. Searching Google, I found this explanation of the theory of a triple-beam balance offered by Ohaus, and it mentions that there is a magnetic dampener that couples to the free end of the arm that is used to stop the oscillation of the beam (presumably by the generation of opposing electrical eddy currents): 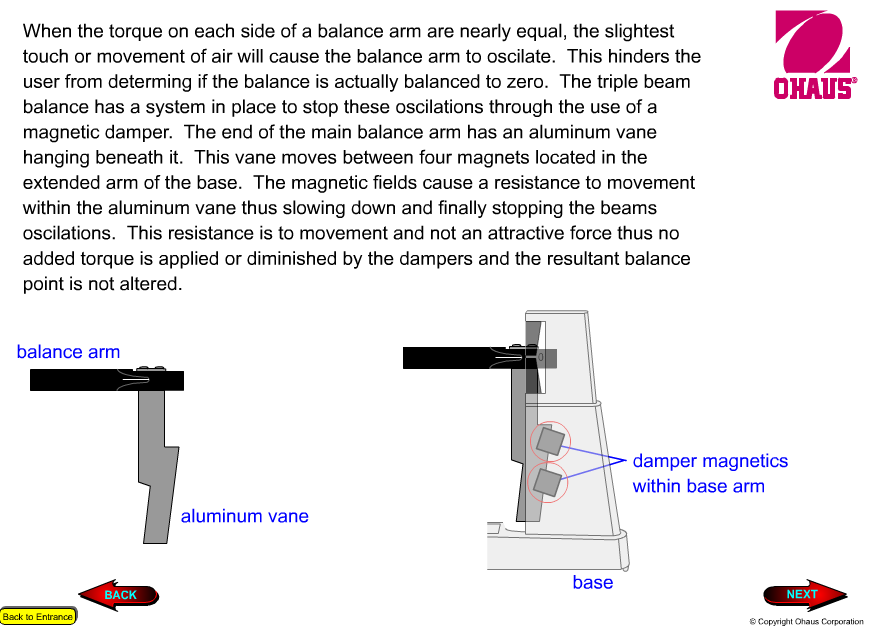 Unfortunately, the slide in question also specifically notes that "this resistance is to movement and not an attractive force thus no added torque is applied", so this is not the correct reason. I searched through the rest of the slides to see if there was any mention of an angle-dependent opposing force, but there didn't seem to be any.

However, it is obvious that there has to be an opposing torque that occurs when the arm moves up and down, as otherwise if the two arms were balanced, there would be a wide range of accessible angles which the arm would be stable in, whereas having worked with these sort of scales before I can say that there is a restoring force that depends on angle.

Possible leads of investigation: according to the same set of slides, the weighing platform makes contact with the balancing arm using a knife-edge bearing:

As a result, if the weighing arm angle is $\theta$, the torque $T_\theta$ provided by the weighing platform will "correctly" be $$T_\theta=T_0\cos(\theta).$$

Otherwise, using a different sort of bearing could cause the load to be applied closer or further down the arm, destroying the $\cos(\theta)$ dependence.

Or maybe the post which is connected to the weighing platform and extends downwards into the hole on the top of the balance is actually connected to a spring:

Unfortunately I don't have access to a mechanical scale at the moment (all mine are digital).

Honestly the easiest way would be to ask one of their engineers, but that'd sort of be cheating :).

Not the answer you're looking for? Browse other questions tagged newtonian-mechanics classical-mechanics forces torque or ask your own question.

20
Why does the weighing balance restore when tilted and released
3
Why does this rotating cube move forward on impact?
3
Are there ensembles for non-equilibrium cases?
2
Static equilibrium question: Horizontal rod attached to a wall
0
Confused about forces acting in this simple statics problem
1
If a toy boat is added to the side of a tank of water that is balanced on a central pivot, why doesn't the tank tip?