How can photons interact with anything?

I read photons do not age because they move at the speed of light. So when a photon interacts with my eyes, aren't they apart in space-time by the difference of the time in the frame of reference of the eye and the time when the photon started traveling?

I guess I am imagining a 4D-space here. What is my error in doing so? Shouldn't particles only interact when they share the same place and time (or are close, obviously they can't be in the same place)?

There is some discussion about this in the question How does a photon experience space and time?. You'll commonly hear it said that photons don't experience time, but this is somewhat misleading.

The trouble is that at the speed of light the Lorentz transformation becomes singular and cannot be used. An object moving at $c$ does not have a rest frame so you cannot make statements about the behaviour of time and space in its rest frame. The claim that time stops for photons is meaningless as they have no rest frame to experience time in. Incidentally this applies to all massless particles and not just light.

Here is a diagram that describes what happens when a photon hits your eye. 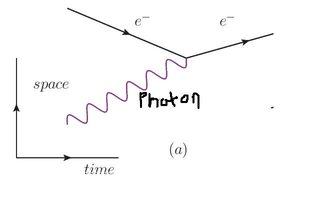 It is in two dimensions, one is time the other is space. The photon interacts with the electromagnetic interaction with an atom in the retina of the eye, where the electron which is bound in the atom goes to a higher energy level and the photon is absorbed giving its energy to the transfer. The consequent deexcitation will propagate along the nerves to the brain.

The time the photon started on the left is irrelevant with respect to the interaction which happens at a specific (space, time ) point, and also the velocity is immaterial.

What is important is the quantum mechanical framework, which is the framework of particle interactions. The Heisenberg Uncertainty Principle even without detailed calculations tells us that there exists an uncertainty in the exact four space point, because calculations give the probability of interaction, and for a given accuracy in the momentum determination for the photon and electron there is an indeterminacy in the position.

This of course has nothing to do with the "age" of the photon, or the time it took from its creation to reach the interaction point. The photon is an elementary particle and elementary particles do not "age". Whether it comes from the sun or from the desk lamp the probability of interaction depends only on the photon's energy ( frequency times h) and the atom it impinges on.

Not the answer you're looking for? Browse other questions tagged special-relativity speed-of-light time or ask your own question.

65
Would time freeze if you could travel at the speed of light?
30
How does a photon experience space and time?
18
Is a photon "fixed in spacetime"?
1
Are signal fronts in a beam not at rest to each other?
1
Beginner question: timelessness of massless particles

6
Does the passage of time effect a photons entanglement with another?
3
Why does only one twin travel in the twin paradox?
5
How is time not a constant?
0
Particle of Light V. Falling Apple
3
How close should you get to speed of light, in order for time to be dilated?
1
Problem with speed of light
1
How can I resolve this version of the twin paradox in special relativity?
0
On a relativistic merry go round, who ages faster — rider or observer?
2
Photons as Observers and the Extended Real Number Line Topology