Why is the orbital angular momentum of a pi electron along the axis of two atoms' molecule one?

I'm reading quantum chemistry. The book says that the orbital angular momentum of a $\pi$ electron along the symmetry axis of a molecule made up of two atoms is $\pm 1$. I think this is a primary question, but I do not konw why.

I currently have a preliminary understanding of this: 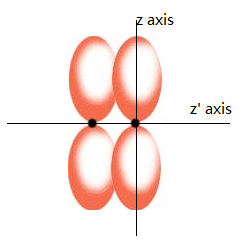 The famous “two-lobed” p eigenstate has the angular momentum projection to its symmetry axis equal to 0, and all other projections of said momentum are u n c e r t a i n . Let x denote original poster’s «z'». Although $L_x$ is uncertain, the two-lobed state is a linear combination of $L_x = 1$ and $L_x = -1$ eigenstates; it was mentioned by original poster. If we glue a molecular orbital from two such atomic orbitals (it is incorrect but, as a dirty approximation, one can try it), then its $L_x$ is uncertain too, but again, it will be a combination of $L_x = 1$ and $L_x = -1$ states. If we turn it by 90° around x, we can hope to obtain another combination of the same states, so we would find two quantum states that correspond to $L_x = 1$ and $L_x = -1$. That’s how the childish four-lobed picture above caused us to make extra steps towards understanding π bonds.

Generally, there are two “styles” for eigenfunctions pertaining to ℓ ≠ 0 orbitals (such as p): real-valued ones and complex-valued ones, where only complex-valued can serve $m_ℓ ≠ 0$ cases. I’d suggest to start from an $ℓ = 1,\ L_x = 1$ eigenstate (it is a complex linear combination of said z-elongated two-lobed state and a similar y-elongated one) and go directly to an $L_x = 1$ π orbital state. It will be already axially symmetric, up to complex argument.

Not the answer you're looking for? Browse other questions tagged atomic-physics molecules quantum-chemistry orbitals or ask your own question.

14
What's is the origin of Orbital Angular Momentum of electrons in atoms?
3
How to understand the symmetry $\Sigma^-$ in the wavefunction of a diatomic molecule?
0
Molecular Orbitals and Nodal Symmetry
6
Ammonia molecule as a two-state system: what if angular momentum is zero?
3
Pi-bond angular momentum
4
Would an $H_2O$ Molecule actually look like this 3D representation if we could see it?
0
Must the total orbital angular momentum quantum number $L$ be less than the principal quantum number $n$? If so, why?
0
Orbital Angular Momentum Ladder Operator Normalisation Ambiguity
0
Benzene ground state