The value of current and voltage in a circuit 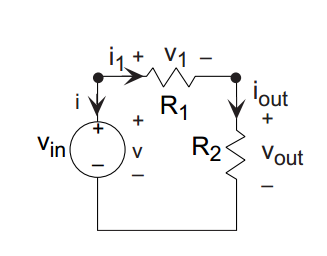 The picture is just for example. I don't know why $i$ and $i_1$ have different directions and $i+i_1=0$ according to KCL. Also, the value of voltage at each element. I mean in why the $V$ of the end of $R_1$ is negative but the start of $R_2$ is positive. Is the sign is just to indicate the direction of current, where the voltage is higher than the other at each element but not tell its value is positive or negative. Moreover, does the $V$ value of each element is define by its difference in $V$ which mean $\Delta V$.

The two currents $i$ and $i_1$ could have been chosen to have whichever direction the author wanted. The choice is arbitrary.

The equation $i+ i_1=0$ is just what KCL tells us: the net current leaving any node in the circuit is 0. Since $i$ and $i_1$ are both defined to be leaving the node that connects them, their sum must be zero. This means that one of these currents will be positive and the other will be negative, and the actual current will be flowing in one direction or the other.

The choice of which end of each resistor to define as positive and which as negative is just as arbitrary as the direction of $i$ and $i_1$. You could define the variables $v_1$ and $v_{out}$ with either polarity. Again, you'd get a positive or negative value for these variables depending on the actual polarity of the voltage.

Moreover, does the V value of each element is define by its difference in V which mean ΔV.

Yes, the two variables $v_1$ and $v_{out}$ are potential differences, indicating the difference in voltage between the terminals of the corresponding resistors.

0
In which direction should flow of electric current be taken while solving problems?
0
Loop Rule Parts Problem
0
Current lagging voltage by more then 90 degrees
1
The sign of the current flowing in a circuit
1
Why can we assume a current direction when using kirchhoff's circuit law?
0
Why does more voltage mean more current?
1
Does direction of current in Node Voltage method circuit analysis matter?
0
Voltage difference between two points