As I understand, water pressure increases as we go towards bottom of the ocean. So if an object* is thrown into water and it starts sinking with some speed, does the sinking object's acceleration increase with increasing pressure?

Also does water solidify under very high pressure and if so is that high pressure achieved at the ocean bottom? If so, would a sinking object stop sinking and rest on the "solidified" water, if we have a deep enough ocean?

Edit: I have accepted best current answer, if you think you can write a better answer, please do so.

That is right, deeper the pressure is stronger. But the pressure is not just in one direction it is in every direction. So the velocity will decrease in most cases. But also you have to be aware of the density of the object. You could read this classical description of diving objects "Thrust" on wikipedia. This is a classical effect, in real cases the relation between deepness and pressure is not always linear.

Here is an example of the every direction pressure.

And answering the other question. That is possible under some specific conditions. You could have solid water. But I don't know exactly if our planet is capable of have that rare condition. In addition I have found information of a exoplanet that matches those conditions NatGeo.

If You make a simplified force balance of a sinking box, You can identify two main forces: Force associated with box's weight $F_g$ acting downwards and buoyancy force $F_b$ acting upwards. The formulas are as follows:

where $m$ is the mass of the box, $g$ is the gravitational acceleration, $\rho$ is the density of water, $V$ is the volume of the box.

Now the balance is:

assuming that the axis goes downwards.

When the depth ($H$) increses, the density of water also increases and therefore the total force draging the box down should decrease if we assume that $V$ is constant. So it looks like the acceleration should decrease in this case. If You consider viscosity forces, dynamic viscosity of water increases with pressure, so it should further slow down the box, but I don't know to what extent.

When it comes to Your second question, the melting point of water decreases with increasing pressure, as it is shown here: 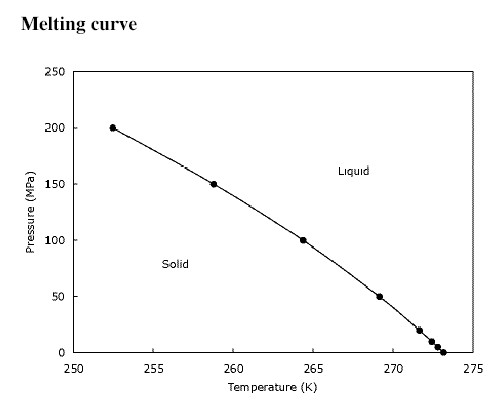 As You can see, the water at the bottom of an ocean should have the temperature much below 0 Celsius degree to solidify, so this isn't really probable. According to wikipedia the temperature of deep ocean water varies from 0 °C to 3 °C.

It is possible to create solid water with enough pressure. Water has other frozen state which do not contain the standard water crystal pattern. This is called amorphous ice.

When we flash freeze organic food, the ice that forms does not conform to the traditional crystalline ice structure. The water does not expand, which prevents the cell walls form bursting and helps to preserve the quality of the food.

It would be possible for an object to come to rest on a solid layer of water, but our oceans would need to be around 500 miles deep (in theory.) Although this is hundreds of times deeper that our oceans on earth (roughly 1/8 of the way to our core), it is theorized that oceans of this depth may be common on other planets and that amorphous ice is the most common form of water in the universe.

Water has its highest density at 4 degrees C. Ice always floats on water surface, because its density is less than water. An object dropped in water will sink, accelerating under the force of its weight (Mg), against the upthrust, as well as the viscous drag resulting from the downward motion; which increases as the speed of the object increase. There will be critical downward velocity at which the sum of the "upthrust + viscous drag" exactly balance the force of the sinking object (Mg)! thenceforth the object will continue sinking at a constant velocity, known as "Critical Velocity", until coming to rest at the bottom of the water, the ocean bed.

Not the answer you're looking for? Browse other questions tagged fluid-dynamics pressure water or ask your own question.

9
Does water turn solid under deep ocean because of high pressure?

9
Water under high pressure
3
Estimate temperature and pressure of steam in a pot of boiling water
3
Why doesn't the water spill out?
0
Would an airtight box filled with air act the same way to 1 bar of water pressure as the same box vacuum-sealed at atmospheric pressure?
0
If we dropped an object into the Pacific Ocean, would it completely sink to the bottom of the ocean floor or not?
2
Boat Hull Drag in Shallow Water
0
How would pressure in a blob of water not subjected to any force field behave?
1
This is my bucket experiment. I use this experiment to explain lift. Am I right?
6
Pressure in giant ball of water floating in space
0
Confusion about the buoyant force applied by fluids