Why can't you hear music well over a telephone line?

Why can't you hear music well well over a telephone line?

I was asked this question in an interview for a university study placement and I unfortunately had no idea.

I was given the hint that the telephone sampling rate is 8000 samples per second.

The hint given by the interviewer is a red herring. The limitation you're hearing has been part of the phone network since long before digital sampling had any part in the telephone system. And it applies even in a local phone call where the signal is never digitized.

It is related to the fact that the connection from a land-line phone in your house or office back to the "central office" of the phone company is essentially a continuous connection through a pair of wires. There's typically no active circuits such as amplifiers, repeaters, digitizers, or other electonics involved.

Given the technology of 100 years ago when the phone network was first designed, a connection of this length could really only carry a very limited bandwidth. The engineers who designed the network did numerous experiments to determine just what frequencies needed to be conveyed for people to understand each other's regular speech, and designed the network only to be sure those frequencies were transmitted. They didn't add any costly components to the system if they weren't needed to achieve this goal.

Later, when they started using multiplexing to connect multiple voice circuits through a single wire (for inter-city connections, for example), the limitted bandwidth allowed them to carry more connections on a single wire, and at that point the bandwidth limitation would have been deliberately enforced by filtering to ensure that conversations didn't cross-talk between each other.

Finally, when digital sampling and digital transmission was introduced into the network, the sampling theorem limitations discussed in the other answers came into play. Fortuitously, the bandwidth limitations introduced in the early days of analog telephone networks allowed digitization to be done at really low bitrates without degrading the signal quality below what it had been all along, and again this allows more conversations to be carried on a given wire in the network.

I want to summarize with a key point that I previously posted in a comment on another answer:

The digital sampling rate (and later, compression methods) used in digital telephony was chosen to match the characteristics of the analog phone network, not the other way around.

According to Wikipedia the frequency range of the plain old telephone service is 300Hz to 3.4kHz. So any music you listen to will be missing the low frequencies and missing the high frequencies. If you remember back to the last time you heard hold music on the phone you'll probably remember that it sounded a bit muffled, but I have to say that it's still recognisable i.e. you can identify what music is being played. I'd be annoyed if my Hi-Fi sounded like that, but the music isn't totally mangled.

In my youth I used to be a Hi-Fi enthusiast, and the manufacturers' technical specs would boast that their equipment had a flat frequency spectrum from around 20Hz to 20kHz. The problem with reproducing this in a phone system is that as DisplayName mentions in their answer, to carry a frequency $f$ over a digital network requires a sampling frequency of at least $2f$ otherwise you get aliasing. Providing bandwidth costs money and reduces call capacity (i.e. fewer calls per optic fibre) so phone backbones use a sampling frequency of only 8kHz, and hence the highest permissible frequency is 4kHz. The upper limit is a bit lower than this because it's hard to engineer audio filters with very sharp cutoffs. The 3.4kHz limit I mentioned above is presumably to ensure that no frequency near 4kHz gets through.

Whether such a large frequency range is required for music playback is debatable. At a recent hearing checkup I was told I cannot hear anything above 12kHz (too many Black Sabbath gigs in my youth) but music on my Hi-Fi still sounds fine to me.

Have a look into the Nyquist theorem. The sampling frequency needs to be at least double the rate of the sampled frequency. I.e. that's why the human ear can hear up to ca. 20kHz and the CD samples at 44.1kHz.

What do we hear instead if we do listen to (originally) 5 Hz to 20 kHz music through the phone? Is everything above 8 kHz simply gone or is there another effect? E.g., will 14 kHz be audible somehow (but differently) at 7 kHz?

Or in other words: "What is happening to the frequencies that are above the Nyquist threshold?"

The frequencies are missing. As simple as that. Not present. What our ear does instead is remember what should be there, based on experience. So when you talk to somebody, you know over the phone your brain adds what must be there. Still I noticed that the first time I did this my brain gave me the real info (lacking frequencies) and only later learned that it can just fake the rest, based on the knowledge of the voice of the opponent. See Wikipdedia:CELP which uses a similar approach for audio compression.

If you want to know more about the reasons of the 8kHz sampling rate you can again use wikipedia: Wikipedia:PSTN the standard used is G.711. Also Sampling Frequency and Human Speech, which I have not read yet, goes into what you need as a minimum for human speech including graphs and explanations. Finally you can look into Wikipedia:MP3 in order to understand psychoacoustics. Hint a beat masks things that come after it for example. So that stuff can be dropped, since you don't hear it and other nice things. :D

This is due to signal processing, not physics. Telephone carriers apply aggressive compression optimized for recording only speech well. The AMR codec, still in use, dates to 1999 and achieves up to about 13 kbit/s. Any other codec would not record music well at that bitrate, either. Even MIDI consumes more data.

Phone companies only built the phone to carry voice frequencies. Bass and tweeter frequencies are generally out of the range of what the phones were built to do. I used to listen to a radio show that when a caller called in with some lame joke, they would play crickets chirping to the person on the phone. It took them a long while and several awkward moments before that figured out the caller on the phone could not hear the crickets but radio listeners could. So they did an on air test and patched crickets to phone and phone to broadcast. Sure enough the crickets were almost completely blocked out by the phone system.

There are a few different reasons. Let's only face the digital channel.

When frequencies above the Nyquist frequency are transmitted, such as in the case of transmitting music, aliasing occurs. This causes distortion. This is detailed in the diagram below. 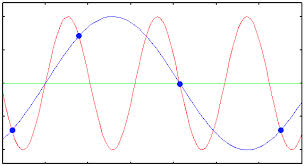 The red line is the original signal. The blue dots represent times that samples are taken of the original signal. The blue line is the signal reconstructed by the ear from the insufficient sampling rate. As you can see, it has been distorted from the red signal and it now has a lower frequency; a frequency lower than the Nyquist frequency of the sampling rate.

I wrote some simple Matlab code for an aliasing experience.

WARNING: Turn volume on speakers/headset right down before execution.

Not the answer you're looking for? Browse other questions tagged acoustics frequency electronics electrical-engineering signal-processing or ask your own question.

13
Why do you only hear high frequencies when a microphone is near its speaker?
0
How to phrase the question of measuring the frequency of a complex sound?
7
Can we compress microsecond duration laser pulses by a factor of 1000?
2
An apparent contradiction in various explanations of frequency bands and data bandwidth
0
Constraints on digital mp3/wav sound reproduction?
2
Why can you hear sound over a wall?
2
Why can't you filter out the sound of running water using noise-cancelling software?
39
How do headphones and earphones produce good bass if tiny speakers can't produce low frequency sounds very well?