Local EPR-experiments with photons in vacuum?

When two entangled particles are measured in an EPR experiment, we consider these events as non-local. Generally I agree. But does this also apply to a pair of photons in vacuum? (and if so, why?) 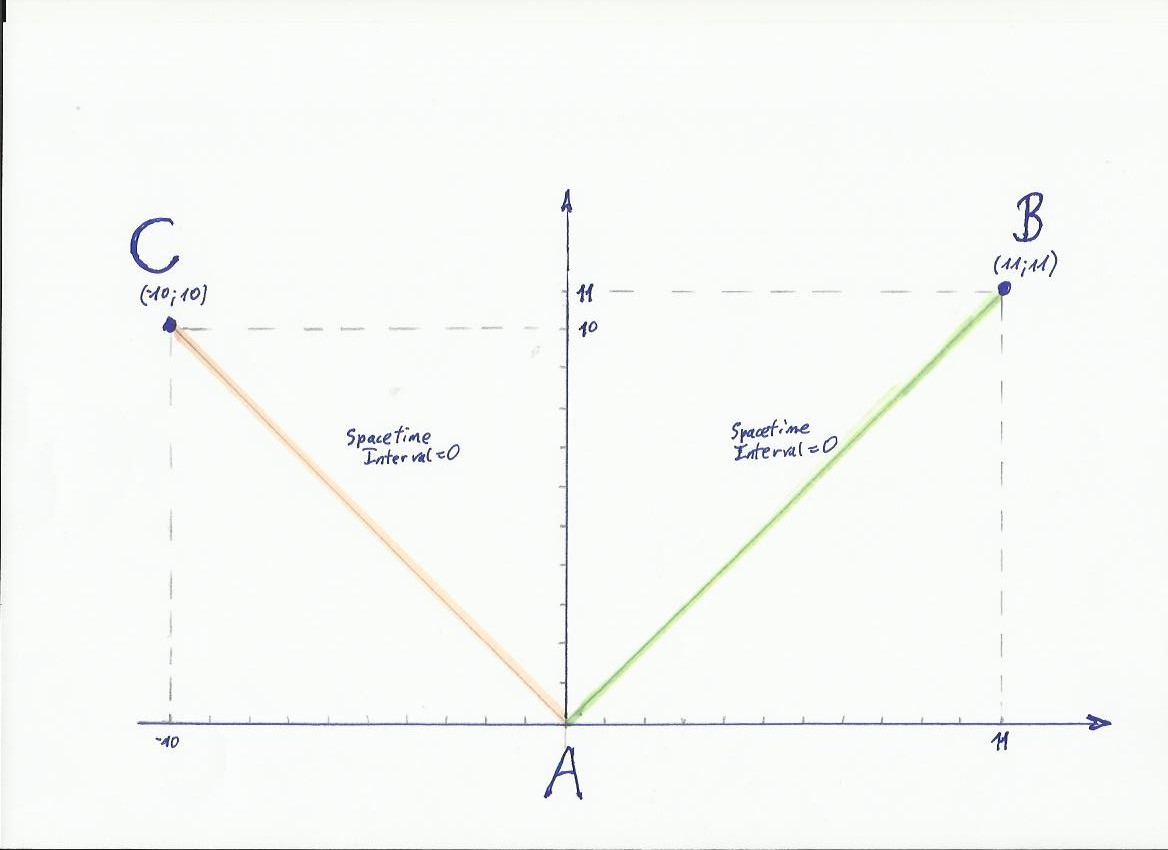 From the point of view of any observer's Minkowski diagram, the two spacetime intervals of the lightlike worldlines of the two photons AB and AC are always zero (so-called "empty intervals"), and by consequence, B and C are located in the "immediate surroundings" of A, and the events should not be nonlocal.

As user 12262 pointed out, some comments have disappeared in the meanwhile.

spacetime intervals of the lightlike worldlines of the two photons [...] in vacuum [...] AB and AC are always zero (so-called "empty intervals"),

and by consequence, B is located in the "immediate surroundings" of C

Hardly ...
But first of all we might investigate whether events A and B are "in the "immediate surroundings" of each other", for instance (or similarly: events A and C).

The sketches clearly suggest that events A and B are distinct events. (Which does not contradict the magnitude $s[ A, B ] = 0$. This property of "null intervals" is certainly different from null vectors in the arguably more usual sense of preserving identity when being added to any other vector.)

These three characterizations are mutually consistent; and either one would seem to indicate that events B and C should not be called "in the "immediate surroundings" of each other".

The principle of non-locality states [... http://en.wikipedia.org/wiki/Principle_of_locality ]

Rather, what's stated seems to be called "principle of locality", for what it's worth.

The issue is that the measurements at $B$ and $C$ are correlated, even if the spacetime interval $BC$ is spacelike.

This is a rather colloquial formulation of the principle of locality. In this "definition" the surrounding is meant with respect to space. A better formulation would be that an event $A$ can only be influenced by events that lie within or on the backward light cone of $A$. That means the special relativistic distance between two events must not be spacelike, and the causing event must occur "before" the caused one.

In your example, the distance between $B$ and $C$ is spacelike, so they cannot influence another according to the principle of locality. However, they are both be influenced by event $A$, because $A$ is on the backwards light cone of both $B$ and $C$.

The EPR paradox shows a violation of locality only in the Copenhagen interpretation and in several hidden variable theories. In contrast, locality is not violated in the EPR of the many world interpretation (but that is a different question).

Minkowski geometry is not Euclidean geometry.

In Euclidean geometry, the "distance" between any two points can be positive or zero, but not negative or imaginary. In Minkowski geometry, that's not true.

In Euclidean geometry, if the "distance" from A to B is zero, then A and B are actually the same. In Minkowski geometry, that's not true.

People sometimes use words like "interval" and "distance" in Minkowski space but that doesn't mean that you can intuitively think of them as being like a traditional Euclidean-space distance or interval. If this really bothers you, then you should mentally replace the phrase "spacetime interval" with different words, "spacetime shminterval". This will vividly remind you that it's entirely different than the intervals that you're used to from everyday life.

To answer your question I will have to give two answers:

I. our real world, with accelerating space-expansion

In this world, the emitters and receivers cannot keep their distances constant, and you would get a hard-time to calculate and adjust their distances to 'keep' it 10 and 11 light years 'until' the photons reach the receivers.

OK let's say this world has no space-expansion. The emitter and receivers are constant 10 and 11 light years away.

Now let's talk about non-locality and your questions in n° 4. "EPR experiments are currently considered to be non-local" OK you are right where you say that most of the EPR experiments are ACCEPTED by QM theories to be non-local, but only in space (3D). In spacetime (4D) it is different. According to SR, the line that you drew, with "spacetime interval=0" is exactly what SR says, for particles with zero rest-mass, it must be 0 so you are correct, there is no need for the word "interval".

The reason for that is what SR says about photons, they are traveling at speed c in space (3D), but their speed in the time dimension is 0. That is why that is a 45degree line and why on that line as you move, your spacetime interval is constant 0. You are not moving in the time dimension if you move on that line, that is, if you travel at the speed of light, but that is only possible if you have zero rest-mass like a photon.

"EPR experiments are ACCEPTED by QM theories to be non-local" and the reason I said that is because Einstein never accepted that (QM) theory to be complete, and never accepted that it is non-local in the EPR experiments. IMO Einstein was right. Please read en.wikipedia.org/wiki/EPR_paradox and this part: ""Acceptable theories and the experiment According to the present view of the situation, quantum mechanics flatly contradicts Einstein's philosophical postulate that any acceptable physical theory must fulfill "local realism"."

So I think Einstein never agreed on that either. IMO he was right when he said EPR must fulfil local realism. An that QM is not complete as a theory. That is why QM cannot explain HOW entanglement works. So you are correct on locality.

Not the answer you're looking for? Browse other questions tagged quantum-mechanics special-relativity quantum-entanglement non-locality epr-experiment or ask your own question.

60
How does light 'choose' between wave and particle behaviour?
15
Wave/particle-duality as result of taking different limits of a QFT
3
Non-locality and Bell's theory
6
Minkowski metric -- why does it follow from the constancy of the speed of light?
6
Does the passage of time effect a photons entanglement with another?
4
Some applications of the Einstein-Podolsky-Rosen (EPR) paradox?
2
How can the 'choice' of a photon said to be delayed?
2
If light travels along null-like geodesics, does that mean it remains at the same point on a spacetime manifold?

9
Lorentz invariance, energy-momentum conservation & the locality of interactions
1
If Alice is moving at relatavistic speeds compared to Bob, is collapse still simultaneous?
1
How to express in terms of spacetime intervals whether two participants in a flat region were at rest to each other
9
How to motivate the importance of the spacetime interval
8
Don't these experiments suggest that locality has to be abandoned in the quantum realm?
2
Does the Bell test preclude localism, realism, both, or just one of either (indeterminate)?
4
What is wrong with violation of locality (EPR paradox)?