How fast do I need to go in order to avoid being seen by the Police?

I was driving down the road at roughly the speed of traffic. I saw a police officer parked on the side of the road, and also noticed that a Semi was traveling in the lane right next to him. This got me thinking, is it possible to avoid being seen from the officer by using the Semi Truck and how fast would I have to go?

Let's say the officer is parked on the side of the road and the semi is traveling on the lane next to the officer: 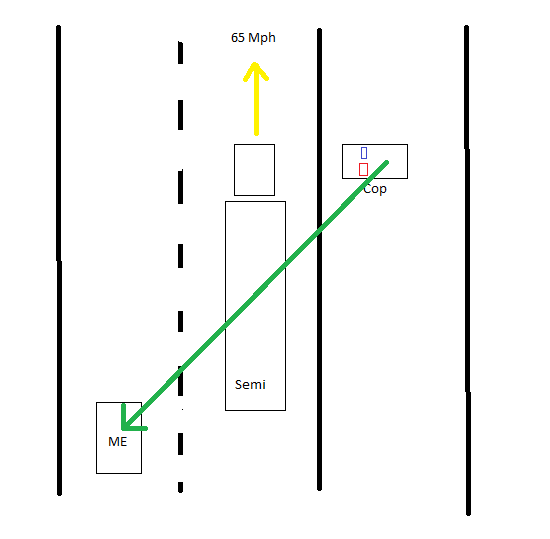 What I want to know:

Note: I am in NO way advocating speeding on the highways and breaking the law. This was just was just sparked as it somewhat happened while I was driving down the road.

classical-mechanics speed visualization
share|cite|improve this question
asked May 24 '11 at 18:19 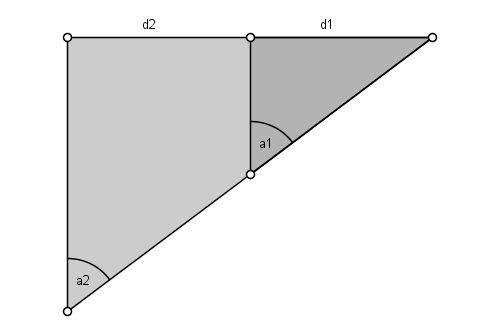 In other words, we want to keep $a1=a2$ in the picture above.

Edit: Some concerns were raised in the comments that this treats the truck as a point. This turns out not to matter. Here's a second picture like the first, but now we have a zone (colored in green) which the truck covers. 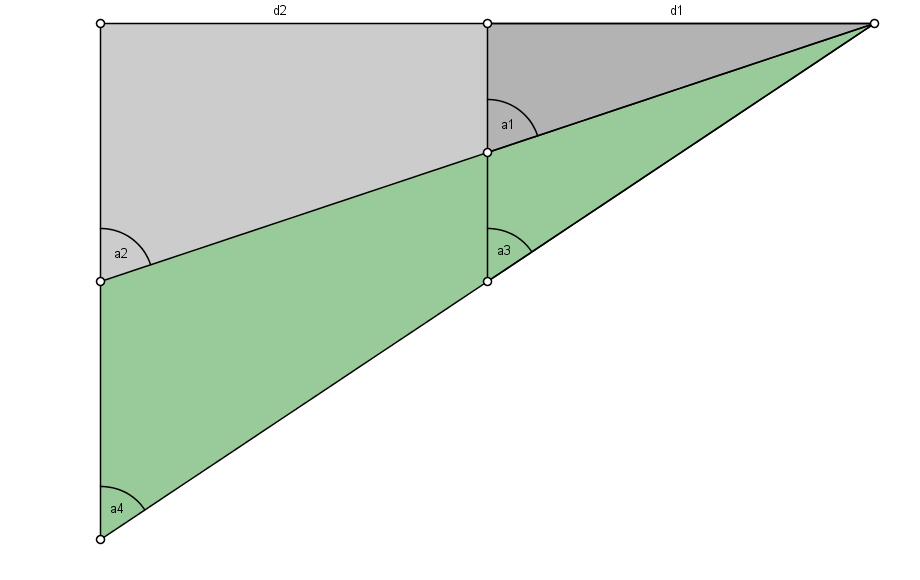 The green triangle gives you a little bit of wiggle room, since you can be covered by the front of the truck or the back or anything in between. However, the total size of your wiggle room does not change while you move (in other words, it doesn't depend on a4). As a result, it should be pretty clear that this doesn't change things much at all - we can think of it as two point-size trucks going at the same speed, and we have to stay between them. Of course, this will give exactly the same answer as the first case - it's really just like hiding behind one point-sized truck.

There is actually one small change, as David notes: If you start out covered by the front of the truck, you can go a little slower than the 195 mph cited above, because you can slowly slide back until covered by the back of the truck. However, if the length of the truck is $L_{tr}=40\textrm{ feet}$ (say), then this change in the velocity is quite small.

For example, suppose that we slide back 40 feet from the front of the truck to the back over the course of a mile. We're going 195 miles per hour, so it takes us 18.5 seconds to go one mile. In those 18.5 seconds, we move 40 feet relative to the truck; this is a speed of about 1.5 mph. So, we can go 1.5 mph slower if we start at the front and go to the back over a mile; taking this into consideration, we get that the speed needed is actually 193.5 mph.

It reduces down to triangle similarity.!

Deriving in relation to time:

I would rather the cop be drawn on the left. Cop is the origin. Then both lanes intersect with the x-axis, at point $a$ for the truck's lane and $b$ for your lane and $a<b$. Now, some line of $y=m x$ intersects all 3 participants. The truck is moving with motion that can be written as

, so we know (differentiate both sides)

, and it's easy to then see that

done. Yes it is constant and is larger by the most obvious fraction you could think of.

Not the answer you're looking for? Browse other questions tagged classical-mechanics speed visualization or ask your own question.

15
How fast is Earth moving through the universe?
0
How fast will the projectile go the second time?
3
How fast do molecules move in objects?
3
How fast can fire spread?
2
How fast would a bullet travel through liquid air?
1
How fast does a long object bent at the center need to be travelling in order to boomerang?
0
How photon would be seen by accelerated particle?
1
How fast does an electron move?