How can a singularity in a black hole rotate if it's just a point?

I guess nobody really knows the true nature of black holes, however, based on everything I know about black holes, there is a "singularity" at their center, which has finite mass but is infinitely small and thus infinitely dense. So a black hole is really just a point mass that dramatically warps the space-time around it so that an event horizon is achieved.

What doesn't make sense to me is how a true mathematical "point" can rotate, or at least how it is even possible to determine if a point is rotating (or if it should even make a difference about whether or not it is rotating, for the same reason it would be impossible to tell if a perfect, featureless sphere were rotating (I know it would have higher rotational energy but lets assume you can't measure that because a true "point" can't attain rotational energy since it has no radius)).

The only conceptual solution I have to describe a rotating black hole would be to compare it to a rotating whirlpool, where the surface of the water is the fabric of space-time... but this is different because there is no "singularity" in a whirlpool that causes the water around it to rotate, whirlpools form from flow of water around a point (put into motion perhaps by some kid swirling water in a 2-liter bottle... it's due to an external cause), but the only thing that could cause rotation around a black hole would be the singularity itself, which doesn't make sense because, once again, how can we know if a true point is actually rotating?

Aside from everything I've said, here is what I am actually asking: Why/how do some black holes rotate... what is the mechanism of their rotation (is analogous to a spinning point or a 3-d whirlpool, or something different)?

They rotate because they are produced by matter that has net angular momentum, and angular momentum is conserved in axially symmetric space-time. So, there's nothing unusual making them rotate that's different from any other physics.

However, you are absolutely right to object that rotation of an infinitesimally small point wouldn't make much sense. In quantum mechanics, we talk about infinitesimally small particles having intrinsic angular momentum ("spin") but this is a uniquely quantum effect and General Relativity is a classical theory. So, your question is a good one. Fortunately, it has a simple answer: the singularity of a rotating black hole in GR is not a point, it's a ring around the black hole's axis of rotation. A rotating ring - even an infinitesimally small one - is sensible because it's topologically distinct from a zero dimensional point.

As a side note, physicists don't tend to believe singularities are real. The general feeling is that quantum gravity will turn them into something more physical. However, it is at least reassuring that GR still makes sense regardless.

At first glance this seems like a reasonable question, but on closer inspection it turns out to be asking about a non-issue. Furthermore, the answers given so far are incorrect resolutions to this non-issue. 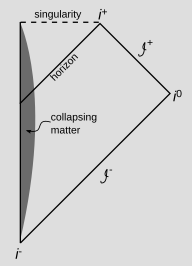 Now consider an observer at a point P in the exterior region of the spacetime. The second Penrose diagram shows three surfaces of simultaneity for this observer. 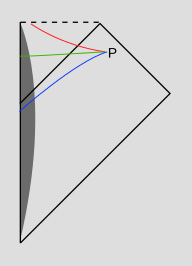 According to the red notion of "now," this observer wonders where the angular momentum is, and imagines that it must be contained by the singularity. But the same observer could equally well choose the green surface of simultaneity, in which case the mystery is solved, and the angular momentum is in the infalling matter, which is inside the horizon but has not yet reached the singularity. Finally, the same observer can choose the blue surface, in which the black hole hasn't formed yet, and none of the infalling matter has even reached the horizon yet.

This shows that the original question is a question about a non-issue. For any Cauchy surface that the observer picks (such as green and blue), there is a perfectly clear explanation of where the angular momentum is. The red surface is not a Cauchy surface, which is defined as a surface such that every inextensible non-spacelike curve intersects the surface exactly once. But if the observer really wants to insist on the red surface, then she can say that the black hole's energy, momentum, and angular momentum are contained in the gravitational fields of the black hole. Gravitational energy is not counted in the stress-energy tensor, and is therefore not localizable, but a distant observer in an asymptotically flat spacetime can say that it exists.

A bunch of answers here have proposed to resolve the paradox by saying that it's resolved because the singularity is a ring. This is nonsense for one reason and also doubtful for another reason.

Reason #1 is that GR does not define angular momentum in terms of taking a cross product of a radius vector with a momentum vector. This definition can't even get started, because there is no such thing as a displacement vector in a curved spacetime. In asymptotically flat spacetimes, there are ways of defining the total angular momentum, but the way you do it is not as straightforward as just writing down L=rxp from freshman mechanics.

Reason #2 is that a singularity does not have a well-defined shape or geometry. In general we cannot even define its dimensionality or topological properties. If you look at a careful treatment such as Hawking and Ellis (p. 276) or Visser ( https://arxiv.org/abs/0706.0622 , p. 28), they will clearly explain that these notions are not really well defined. A singularity is by definition not a point-set and not a point-set where the metric is defined, so we lack the measurement apparatus to talk about its shape or geometry. Statements that a Kerr black hole has a ring singularity are shorthand for statements that in a certain coordinate chart, if you throw away the physical metric and instead impute a Euclidean metric to the coordinates (as if they were ordinary spherical coordinates), then the coordinates at which the singularity occurs look like a ring.

An ideal black hole with non-zero angular momentum is described by the Kerr metric. The singularity of such a black hole is not a point.

According to General Relativity a rotating black hole cannot be a point, for the reason you observe.

A line bent round on itself forms a ring and is one candidate solution, spinning around its axis so it appears motionless. Oddly, an object may have a reasonably stable orbit through the ring without falling into the singularity. Even more oddly, for that object Time resets to zero every time it passes through the plane of the ring on the inside.

A finitely short straight line is another candidate, spinning around an orthogonal axis like a drum majorette's baton. This appears to allow the possibility of a "naked" singularity, unshielded from the observing eye by any event horizon.

None of this is very palatable, so much hope is placed on a quantum theory of gravity to get us out of here. In passing we may note that electrons are apparently point particles which exhibit "spin" and hence angular momentum. Some physicists are uneasy about that and talk of equations "analogous to spin". Nobody knows whether something similar might or might not apply to a quantum treatment of black holes.

Not the answer you're looking for? Browse other questions tagged general-relativity black-holes angular-momentum event-horizon singularities or ask your own question.

4
How can black holes have electric charge and spin?
0
Are black holes 0 dimensional?
0
How is rotational information transferred to a singularity?
1
How can black hole rotate?
0
What does that mean, a black hole "rotates"?
13
What are some useful ways to imagine the concept of spin as it relates to subatomic particles?
16
How does the Penrose diagram for a spinning black hole differ in realistic scenarios (formed by stellar collapse)?
5
How can a black hole rotate if time dilation stops time at the event horizon?
2
What is exactly rotating in a rotating black hole?
2
What is the problem with a rotating singularity?
See more linked questions