(The premise of this question is has been shown to be false in the accepted answer. Read only if you have similar query, but not clear if it has an answer.)

In case you are thinking that there is some trickery with which this question can be answered in a manner similar to the barn door paradox, let Charlie travel in the track parallel to Bob, in the opposite direction (both Bob and Charlie are equidistant from Alice’s view point and are approaching with the same speed). Now we will have three different observers with different predictions; but due to law of conservation of energy, the photons can be detected by only one of the sensors, which should settle the confusion (or if they do separate, we would be able to tell because of the lesser energy liberated by the photon). In general, the experiment suggests that depending on the relative speed of the train to the station, there are an infinite number of positions in which the photon can be found, which could either support the many worlds theory, or is at least at odds with special relativity.

Your premise that Alice and Bob observe both photon trajectories as vertical is false.

The locus of events that form the worldline of either photon are absolute but the coordinates Alice and Bob assign to these events are not.

If Alice observes the station emitted photon to have a constant $x$ coordinate $x = 0$ then, assuming the photon is emitted at $t = t' = 0$, the Lorentz transformation to Bob's coordinate is

In other words, Bob does not observe the photon to have a vertical trajectory but, rather, to have a horizontal component too.

Are you not familiar with the well-known light clock thought experiment? 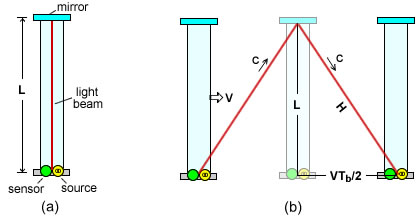 If the Galilean transformation were true, Alice would observe Bob's photon to have a vertical speed of $v_z = c$ and a horizontal speed of $v_x = v$ and, thus, the photon would have a total speed of $u = \sqrt{c^2 + v^2}$

According to the Lorentz transformation, Alice observes Bob's photon to have a total speed $u = c$ and a horizontal speed of $v_x = v$ thus, the vertical speed of the photon is reduced, according to Alice, to $v_z = \sqrt{c^2 - v^2}$.

Notice that the only thing used here was the laws of physics being the same in all reference frames. Thus we can do the same thought experiment in newtonian dynamics with a ball being thrown into the air (ignore gravity). Then you would have said that the ball thrown upward from inside the train "should hit the station’s ceiling since the train’s detector would have moved away by the time the ball travels upwards." But this is not true because we know that the train is an inertial frame and so in the frame of the train the ball must move straight up and so Alice will see the ball moving diagonally, so the ball will hit the train's detector and miss the station's detector.

When the photons are emmited, Alice will see that Bob's photon has a finite horizontal momentum component. That is, it's not travelling vertically towards the roof, but diagonally towards the place where Bob's sensor will be some time later (how much time depends on Bob's speed relative to Alice, which determines the horizontal component of Bob's photon momentum). Both Alice and Bob will agree that Bob detects his own photon. Think of it as if Bob threw a ball upwards inside the train (an ultrarelativistic, massless ball traveling at exactly the speed of light).

By the way, you may want to reformulate your question. Saying that the photon sources trigger "at the same moment" does not make sense: the same moment respect to which reference frame? Simultaneity notions change when you go from one frame to another in SR.

The problem is that geometry is being confused with real world momentum. The photon on the stationary train and the one on the moving train are both being emitted vertically with the same momentum vector as per Newton's first law. When they return after bouncing off the mirrors they are still vertical and this is why they are both seen by the stationary witness to arrive at the same moment. (the rider also sees the same thing.) But how can this be if the mirror has moved down the track while the photon was in transit thus creating a longer light path? The answer is that at the instant it was emitted the photon on the moving train picked up a second momentum vector from the energy of the train itself. So during its transit it moved along its own vertical momentum vector while moving simultaneously horizontally along the transport vector given to it by the train. At no time did the photon turn and move diagonally. The photon need not travel at light speed along the transport vector. To make sense of this imagine that the vertical vector is subdivided into a million sub units as is the horizontal vector. The photon travels the first vertical increment, then the first horizontal, then the second vertical and so on like climbing a stair casing. The increments are so small that our perception is tricked into thinking that we are seeing a smooth continuous geometric diagonal line. If that's how we see things then we will have to patch up our perception with an ad-hoc time dilation and Lorentz transformation. A minimum of two vectors are required for a state of momentum to exist between two reference frames. When the train is stationary, the transport vector is set to zero. The photon vector is always set to "C". The transport vector velocity varies between zero and "C". There are as many transport vectors as there are reference frames in motion relative to the photons own reference frame.

As the speed of light is supposed to be independent of the motion of the source, the light clock can't work.The beam emitted from the source will fall short of the mirror, which will have moved on. Otherwise the Einstinian postulate would have been violated, as the beam would have to exceed the speed of light, being c plus the movement along the x axis. Impossible.

5
Does the passage of time effect a photons entanglement with another?
3
Meaning and logic of Einstein's train thought experiment
1
Lorentz Transformation in Different Reference Frames
0
SR: $t'= t/\gamma$ vs $t'=\gamma(t-vx/c^2)$
1
A special relativity question about two platforms and a light source
0
Doubts about a simultaneity thought experiment
1
Does light have “perpendicular inertia”?