Why we say that EM waves are transverse in nature? I have seen some proofs regarding my question but they all calculate flux through imaginary cube. Here is My REAL problem that I can't here imagine infinitesimal area for calculating flux because em line of force will intersect (perpendicular or not) surface at only one point so $E.ds$ will be zero so even flux through one surface of cube will always be zero. I am Bit Confused. I DON'T KNOW VECTOR CALCULUS BUT KNOW CALCULUS.

Why we say that em waves are transverse in nature?

In a region empty of electric charge, we have, from Maxwell's equations:

Since you don't yet know vector calculus, let's rewrite these divergence equations as so:

Now, assume an electromagnetic wave is propagating in the $z$ direction so that the space and time variation of the field components are of the form

Since the spatial variation is zero in the $x$ and $y$ directions, our equations become

Which means that electric and magnetic field components in the $z$ direction, the direction of propagation, must be constant with respect to $z$.

In other words, only the electric and magnetic field components transverse to the direction of propagation vary with respect to $z$. i.e., the electromagnetic wave is transverse.

Why spatial Variations are zero in both x and y directions.

We stipulated that the field components are of the form $\cos(kz - \omega t)$ which means the wave is propagating in the $z$ direction.

em line of force will intersect (if perpendicular) surface at only one point.

This is not the case for a plane wave, which is the simplest case one usually considers. I think I know what's going on to make you think this. This may or may not be the issue that helps you.

Take this typical picture of an EM wave.

It is so very tempting, yet incorrect, to think that the E and B field are only defined (non-zero) on that axis. No. Here's a better picture that only shows one of the two fields. 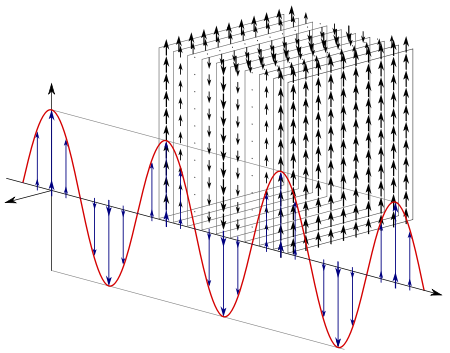 It's called a plane wave because the E and B fields have the same value everywhere on some plane. So if you imagine this wave incident on some cube, the dot product $\vec{E}\cdot d\vec{S}$ has a value at more than just one point.

I am going to try to "unconfuse" you.

Let's start with a picture of ocean waves; as seen from the side, they look like "sine" waves (just like BMS's red EM wave); as seen from the top, the crests and troughs make lines (not points). The same thing happens with the E and B waves (make lines), and since they are perpendicular to each other, they form a plane (two lines make a plane). This is why the flux is evaluated over a surface area (not a point).

Not the answer you're looking for? Browse other questions tagged electromagnetism electromagnetic-radiation waves or ask your own question.

2
Gauss' law - changes in the magnitude of E field inside the closed surface
10
How can radiation be a transverse wave? Does light really resemble a rope? How can a 3D field be a medium for non-spatial 1D waves? Need mental model
3
Why can we use the 2D projection of a 3D gaussian surface to calculate electric flux?
10
Are non-zero-area pulses of electromagnetic radiation possible?
1
How to derive Biot-Savart's law for the magnetic field of a surface charge
3
Imaginary components of Poynting vector in rectangular waveguide
0
Magnetic flux through a loop the same as flux through the plane outside the loop?
1
Problem with Faraday's law and Lorentz force
0
Point Charge above an Infinite Plate