As I understand, "dark matter" is what they call a theoretical substance which is only known by it's influence upon velocity curve of the galaxy.

If indeed the gravity of "dark matter" is so strong that it keeps our solar system in orbit, then it's force effects on Earth should be comparable with that of our Moon.

However, we can observe the moon tides, and combined Moon-solar tides, but we never observe the tides resulting from pull towards the center of the galaxy. Why would that be?

Tides arise because another body of size $r$ (measured from the subject body's center of mass) experiences a different gravitational attraction on either side of the body. That difference is

So not only is the galactic dark matter distribution fairly even, but most of it is at huge distance from the Earth which strongly suppresses the contribution from both the dark matter core of the galaxy and the Baryonic matter core as well.

The solar-system effects of dark matter are almost zero, if not exactly zero. While dark matter is the majority of matter in the galaxy, it is also very diffuse when compared to things like the sun and the Earth.

Dark matter is supposed to exist in a halo with radial symmetry about the galactic center. The gravitational effect is therefore indistinguishable from any other constituent of the galaxy. Things closer than us to the center pull us inward; things farther than us from the center have no effect.

In the same way, we cannot gravitationally observe the composition of the interior of the earth, from a vantage point on the surface. Lowering a probe deep into the planet would allow such structure to be mapped. This is analogous to observing the revolution of stars around other galaxies.

If we could measure the tidal force of the galaxy, i.e. the difference in acceleration on opposite sides of the solar system, then dark matter might be apparent. Essentially this would be measuring the local density of dark matter presumed to uniformly fill the solar system. But it would be a small effect, intuitively on the order of the galactic orbital acceleration times the ratio of the measured distance, to the distance to the galactic center, squared.

It seems doable, with sufficiently precise probes launched into diverging orbits. However, gravitational effects are what we do know about dark matter so it doesn't seem a very useful experiment. Perhaps a very large space-based gravitational wave observatory would need to correct for the effect, though (as an offset from ordinary tides resulting from difference in galactic orbital distance).

The distribution of dark matter in the Milky Way is (probably) flatter than the distribution of baryonic matter (see figure 1 in the linked paper - the Solar System is at about 8 kparsecs). While there would be some tidal effects they would be less than the tides generated by the visible stars, dust clouds etc, and these in turn would be less than in a setup like the Solar System where most of the mass is concentrated at the centre.

Actually calculating the tidal force would be hard, but you can immediately see that it's small by looking at galactic rotation curves. The tangential velocity is independant of radius over a large range, so there would be little or no tidal force until you got outside this range. I found this rotation curve for the Milky Way: 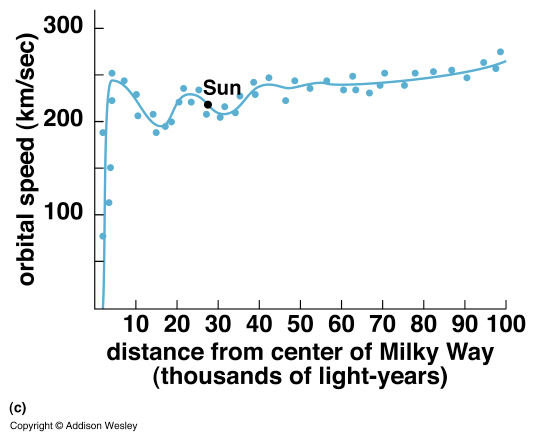 here. There's no reference for this so treate it with care, but it does make my point.

Not the answer you're looking for? Browse other questions tagged dark-matter tidal-effect or ask your own question.

4
If matter creates space, shouldn't there be experimentally detectable consequences?
9
How does dark matter halo outside a galaxy help to explain galaxy rotation curve?
3
Did dark matter cause the formation of the Solar System?
33
Can we run out of gravitational (tidal) energy?
0
Is it possible for the Oort cloud to account for the Dark Matter issue?
6
Will extracting power from ocean tides affect the moon's orbit in the LONG run?