I am working through Yale's Physics 201, and on the first problem set there is a question that is puzzling me. From my reasoning, I think the answer they provided is incorrect hence why I am here. The question is as follows:

Two sphere of mass m and negligible size are connected to two identical springs of force constant k as shown in Figure 1. The separation is a. When charged to q Coulombs each, the separation doubles. (i) What is k in terms of q,a,and ε0? (ii) Find k if the separation goes to a/2 when the charges are ±q. (iii) In case (i) suppose the charge on the right is held fixed while that on the left is displaced by a tiny amount x and released. Find the resorting force F = −kex and the (angular) frequency ω of small oscillations. (I call the effective force constant for oscillations as ke to distinguish it from the k for the springs.)

For part (ii) they provided the answer:

Their reasoning is that because the separation was reduced to $$\frac{a}{2}$$ the length of the spring was in turn reduced by $$\frac{a}{4}$$ and that's how they arrived at the answer. However, I thought that of a system where the length of both springs is 1 and the separation is also 1, so the system is 3 units long. If I were to reduce the separation by half (like the question), each spring would increase its size by a fourth, so that it would be $$\frac{5a}{4}$$ equalling to 1.25 for one spring, 1.25 for the other, and .5 for the separation, giving the total 3 units.

So my question is: is my reasoning incorrect? If so, how do I make sense of their answer? 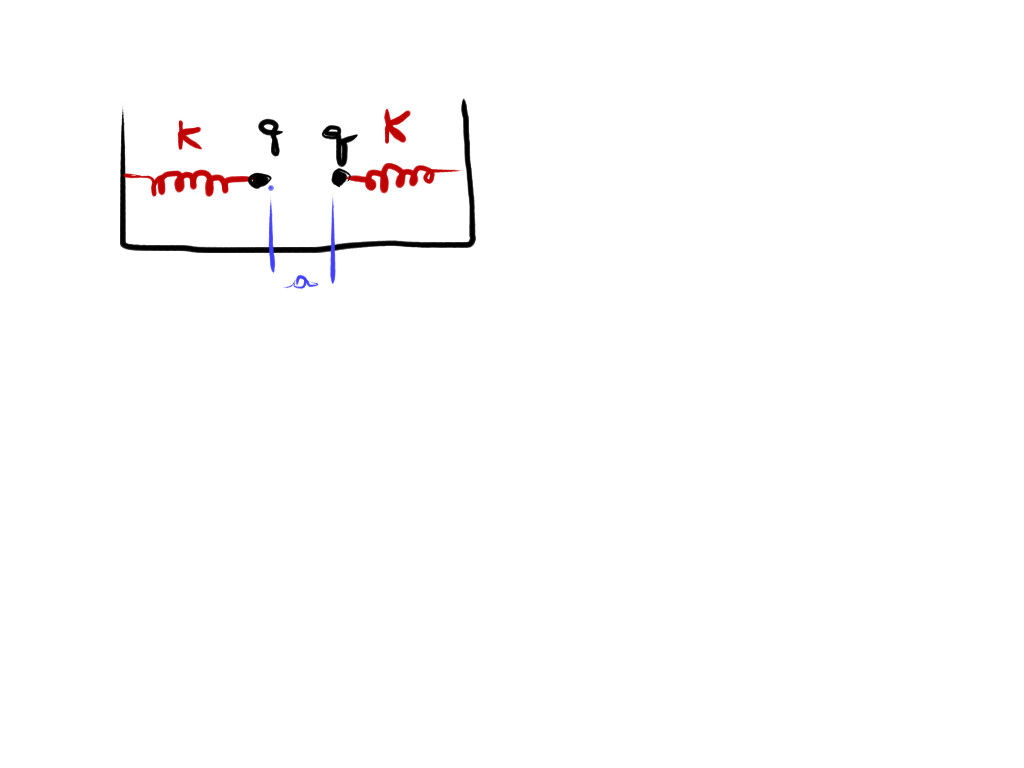 The only mistake I see is " the length of the spring was in turn reduced by a/4". It should read: increased by a/4. In that sense you are right. But for the force of the spring you should still use the displacement of a/4. After all, the spring could have length l not equal to the gap a. That one is of your own device.

The problem is asking you to equate the coulomb force and the spring force, and solve for k.

Here, r is the separation between the two masses, and x is the displacement of an individual spring.

Not the answer you're looking for? Browse other questions tagged homework-and-exercises electromagnetism electrostatics or ask your own question.