How does Cooper pairing work?

Cooper pairs are one of the models how superconductivity is explained.

What still baffles me is how a vibration of the crystal lattice (the so-called phonon) can interact with the electron (an actual particle), in such a way that it then creates a coupled pair with an other electron...

What is the explanation for this behaviour? What is the maths behind it?

Basically Cooper pairs are just pairs of electrons which attract each other due to electron phonon interaction, this interaction is caused by coulomb force, which exists between electrons and lattice (positively charged nucleus(protons)), because lattice vibrates(this vibration is called phonons), phonons affect electron (because electron is moving in changing potential field caused by lattice vibrations), and sometimes electron will absorb that phonon, and will gain some momentum $\vec{q}$. So, in the beginning, electron's state is described using this wavefunction: $|\vec{k_1}\rangle$ where $\vec{k_1}$ represents momentum of the electron, and it's energy is described using this Shrodinger Equation: $$ h|\vec{k_1}\rangle=\epsilon_{k_1}|\vec{k_1}\rangle $$ Where $h$ is hamiltonian for single electron and $\epsilon_k$ is it's energy. Because lattice is vibrating, electron is moving in changing potential field, and sometimes electron will absorb that vibration (electron will absorb phonon), and it will gain momentum and it's state will be described using this wavefunction: $|\vec{k_1}+\vec{q}\rangle$:

As you can see electrons can either absorb or emit phonons. Before now we have been considering single electron model (i.e. system with just one electron), now in order to explain how do electron pair forms, we have to add one more electron, as I have already mentioned electrons can exchange momentum with phonons, due to this effect, one electron can emit phonon, which will be absorbed by another electron, i.e. electrons will exchange phonon, this process can be described using this feynmann diagram: 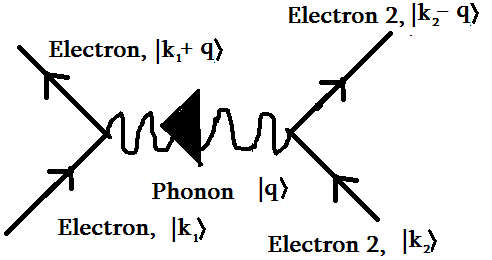 Where $\omega_q$ is lattice vibration frequency and $M_q$ is probability amplitude of electron phonon absorbtion which momentum $\vec{q}$. As you can see if $|\epsilon_\vec{k}-\epsilon_{\vec{k}+\vec{q}}|<\hbar\omega_\vec{q}$ potential is negative i.e. there exists force which attracts two electrons, but if $|\epsilon_\vec{k}-\epsilon_{\vec{k}+\vec{q}}|\geq \hbar\omega_\vec{q}$ then potential is positive, and because of that, electrons aren't attracted to each other and no cooper pair is formed.