Friction as a Centripetal Force

When an object is moving in a circle, won't the frictional force oppose it's motion? And if the velocity is always tangential to the path, there is no component of it towards the center, so there is no component of friction towards the center (since the frictional force is antiparallel). So how can friction be a centripetal force, like in the case of a car rounding a corner?

Frictional force opposes sliding motion, basically. Car tires produce centripetal force by changing their angle relative to the rest of the car's orientation. The tires do not slide in the direction of the tires' orientation: they roll. Friction in this direction rotates the tires, or if the engine is applying force to the wheels during the turn, friction prevents the tires from "burning rubber", and pushes the car in this direction.

Meanwhile, motion in the direction of the rest of the car's orientation is opposed by friction only to the extent that it is not motion in the direction of the tires' orientation. The velocity vector corresponding to the rest of the car's orientation can be understood in terms of these two orthogonal components. The component corresponding to the tires' orientation is basically not subject to friction for our purposes (ignoring whether one's foot is on the gas pedal). The component that does not correspond to that other component is orthogonal and opposed by centripetal friction. 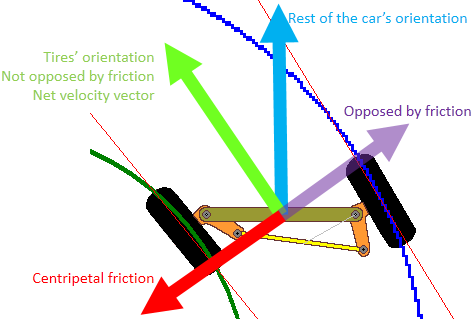 Based on GIF by Droidmakr.

If tires' orientation $=$ rest of the car's orientation, basically no centripetal friction results.

The frictional force is opposing the tendency for the car to slide off the road. Think of a merry go round: If it is really fast you will struggle to stay on. If it goes really fast you will grab on to the bar and your body will point radially outward from the center of rotation. Eventually you be able to hang on and you will fly off. This is the same idea as the car turning. If there were no friction the car would fly off the road (or just continue straight as the road bends). The car needs static friction to keep it on the road (that is turning) and hence cause the centripetal acceleration.

As for friction always opposing motion that is not necessarily true, for instance this case. Kinetic friction will always oppose direction of motion. Static can friction just opposes the tendency to move in a certain direction (i.e. the car tends to move outward (or off the road) but the friction keeps on the road and is radially pointing inwards because the car tends to radially fly outward.

See @NickStauner 's answer for a very nice picture of my description (and read his answer as well!)

Not the answer you're looking for? Browse other questions tagged newtonian-mechanics friction centripetal-force or ask your own question.

-1
How does static friction provide centripetal acceleration?
4
Why does friction act radially inwards when a car turns?