How do a microscope's optics expose defects in the user's vision?

I've got cataracts in both eyes. My vision is correctable to 20/30, so the cataracts are essentially a non-issue in daily living. But when I use a microscope, which I do daily, (binocular, zoom 7x-30x) the picture I see is occluded in the area where the cataracts are on the lenses of my eyes. I can sort of see the shape of my cataracts by using the microscope. What is it about a microscope's design that makes viewing much more difficult than with ordinary vision?

The essence of the difference that makes cataracts visible is illustrated in the diagram below. 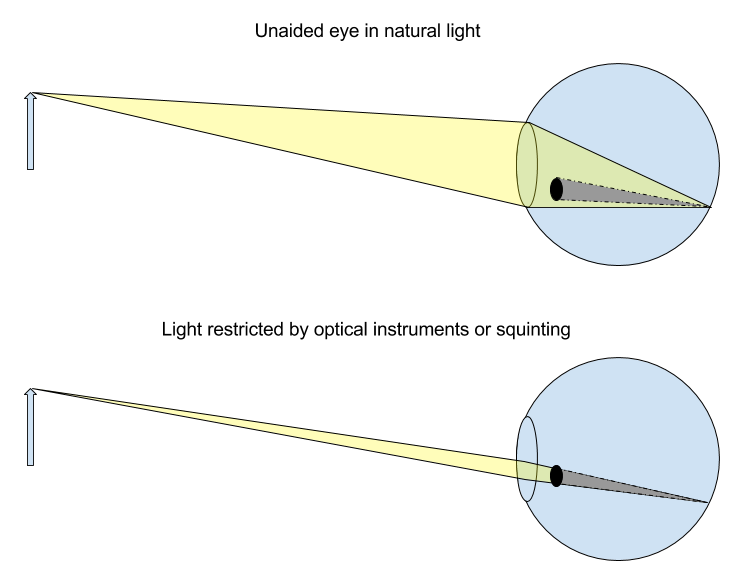 In natural light images images can form directly behind a cataract from rays travelling around the obstruction. Optical instruments and also squinting, as Lenny mentions in the comments, restrict the rage of light paths available, creating shadows behind the cataract.

This can be worked out using ray diagrams A Wolfram interactive demonstration of microscope ray diagrams can be found here. There is also a youtube video

I think the main difference is how light arrives at the image. Withe real objects and projected images light is generally reflected from a surface that is not smooth at the scale of the wavelength and the law of reflection is not obeyed. Th light scatters in mnay directions. Also in the case of a real object the incident light arrives from many directions. Overall there is a greater variety of paths the light can take to the eye.

It would be interesting to know if @Lenny esperiences this or similar effect in any other circumstances like looking into other kinds of optical instruments, looking directly into a bright light or watching a movie in a dark room. Since he did not mention anything, I am guessing that he does not, in which case the above explanation is the only one I can think of.

With full specifications of the microscope it would be possible to calculate if the size of the circle of confusion at the pupil and determine the plausiblity of this explanation.

My intuition is that normally your eye collects light from a large area to form an image, so small-ish obstructions like cataracts get "blurred over" whereas when looking through a microscope the image is coming from a very small area and the light acts as the bulb in a projector, with your cataracts as the projected "slides" and your retinas the "screen."

Not the answer you're looking for? Browse other questions tagged optics geometric-optics vision microscopy or ask your own question.

0
Why Least Distance of Distinct Vision is treated as image distance in the lens equation.
5
How do HUD optics create readable text so close to the eye?
1
Could laser speckle patterns be used in diagnosing vision defects?
0
What is the optimal light setting for human vision? In other words, is my vision better during the day or at night?
1
How lens works in eyeglasses for distance and near vision?
1
Am I right about IR vision?
0
My question is about ray optics particularly image defects