Schrödinger's Equation and the depth of a finite potential well

Before I ask my question, I have to stress: I have absolutely no idea what the math is going on. I've read my textbook, several Wikipedia articles, scoured the internet, and don't feel anymore knowledgeable after hours of reading. I am frustrated beyond belief—I apologize if the quality of this post decreases because of that. Here's the question I'm working on (but any illumination of the surrounding concepts is much appreciated; the question itself doesn't have to be answered at all, I'd just like to have some idea of what I'm doing):

A finite square well 1.0 fm wide contains one neutron. How deep must the well be if there are only two allowed energy levels for the neutron?

I know that Schrödinger's Wave Equation is:

Which is all fine and dandy... but what is it? I understand what it is mathematically, but that isn't telling me anything of why it's useful. Did Schrödinger just plug De Broglie's relationships into the wave equation, call it a day, and get famous? What is this a wave of? What's it supposed to be? This equation is so out of all context for me that just working with it is made more difficult. My textbook says:

The reasoning followed by Schrödinger is somewhat difficult and not important for our purposes.

But then goes on to throw around some constants and make some assumptions about $\Psi(r,t)$ in order for it to... preform some undisclosed magical wave-matter-related things.

From what I've read, all I can gather is that—in solving this problem—I have to construct wave-equations for various potentials inside and outside of some "well"? What is the well? There's something about even and odd parity, which I think refers to there needing to be a whole-number of wavelengths within that 1 fm range (why?), but otherwise I'm pretty much dead in the water.

This isn't a Quantum Mechanics class in particular; it's a general "Modern Physics" class. So far, the whole of the class seems to be randomly tossing out equations, constants, and relationships without context, derivation, or motivation—this confusion has become a very unfortunate (and frustrating) standard for the class. (And I despise the textbook. Help me. :l) 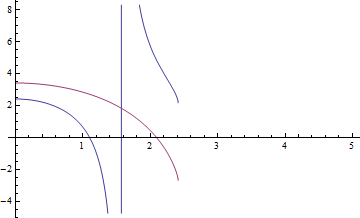 has two zeros (excluding the discontinuity line, which is a graphing artifact of the $\tan$ function), so $V_0\approx2\times10^8\text{eV}$ is about right. Atomic nuclei have diameters on the order of several femtometers, so this gives you a very approximate lower bound on the order of magnitude of the binding potential needed to hold a nucleus together.

If you are unsatisfied with the exposition your class is providing, Section 5.2 of the 2nd Edition of Eisberg and Resnick's Quantum Physics has an extremely good plausibility "derivation" of Schrodinger's equation.

First: The Schrödinger equation is a equation using functionals. Solutions to this equation are such $\Psi(r,t)$, that fulfill this equation. The finite square well 1.0 fm wide means you have a potential $V(r)$ which is zero for r<0 and r>1fm and -d in between. d is your depth. Now you have to determine d such, that only two of the resulting $\Psi(r,t)$ fulfilling the Schrödinger Equation are bound.

This isn't a complete solution, but should help you for your studies in textbooxs, where the square well is a standard example.

Here is the only way I got into schrødinger:

2: Solve them for a chargeless particle

Manipulate the answer from 2 like in this text. Read the part about wave packets first by hitting the tab up in the link below and try to put a wave packet ito maxwell would work I believe.

All is just linear additions actually

Not the answer you're looking for? Browse other questions tagged quantum-mechanics homework-and-exercises wavefunction schroedinger-equation potential or ask your own question.