Why does a remote car key work when held to your head/body?

I was trying to unlock my car with a keyfob, but I was out of range. A friend of mine said that I have to hold the transmitter next to my head. It worked, so I tried the following later that day:

Then I thought, my body is acting like an antenna, but how is that possible if I am holding the key? Why would it only amplify the signal if I hold it against my head and not if I simply hold it into my hand?

Here's a vid of Top Gear demonstrating it.

This is a really interesting question. It turns out that your body is reasonably conductive (think salt water, more on that in the answer to this question), and that it can couple to RF sources capacitively. Referring to the Wikipedia article on keyless entry systems; they typically operate at an RF frequency of $315\text{ MHz}$, the wavelength of which is about $1\text{ m}$. Effective antennas (ignoring fractal antennas) typically have a length of $\frac{\lambda}{2}=\frac{1}{2}\text{m}\approx1.5\text{ ft}$.

So, the effect is probably caused by one or more of the cavities in your body (maybe your head or chest cavity) acting as a resonance chamber for the RF signal from your wireless remote. For another example of how a resonance chamber can amplify waves think about the hollow area below the strings of a guitar. Without the hollow cavity the sound from the guitar would be almost imperceptible.

Edit: As elucidated in the comments, a cavity doesn't necessarily need to be an empty space; just a bounded area which partially reflects electromagnetic waves at the boundaries. The area occupied by your brain satisfies these conditions.

Edit 2: As pointed out in the comments, a string instrument is significantly louder with just a sounding board behind the strings, so my analogy, though true, is a bit misleading.

Edit 3: As promised in the comments, I made some more careful measurements of the effect in question, using a number of different orientations of remote position and pointing. I've posted these as a separate answer to this question.

As promised in the comments to my answer, I went out and measured the effect in a number of different configurations (a couple of days later than promised :-)). For those of you who just want the conclusions, here they are:

The remote seems to work better when held to the head though the improvement isn't as marked as one might have expected from a google search of the topic. The best possible orientation seems to be to hold the remote flat against your temple. If you aren't willing to hold it to your head, pointing it at the vehicle seems to work better than pointing it up, and there doesn't seem to be much dependence on how high you hold it. Finally, holding the remote to your chest is worse than just holding it at arm's length.

I chose six different positions in which to hold the remote, and in each of those positions I held the remote in two different orientations (described in the list below). In each position/orientation I clicked the remote 3 times, waiting a few seconds between clicks. I recorded the number of times out of 3 that the car responded to my click.

The car, a 2009 Volkswagen GTI, was parked sideways. Temperature: 70.5$^\circ$ F; Barometric Pressure: 29.75 inHg; Humidity 86%; Winds: ~5 mph. There were no large structures around accept for the concrete encased stainless steel vacuum tube of the LIGO Livingston Interferometer which runs parallel to the measurement axis and extends for kilometers in both directions. The battery in my remote is a bit old, but I tried to keep my clicks evenly spaced and began with several discarded clicks to try and cancel out battery effects.

The different orientations are documented in the picture below, but here is a description 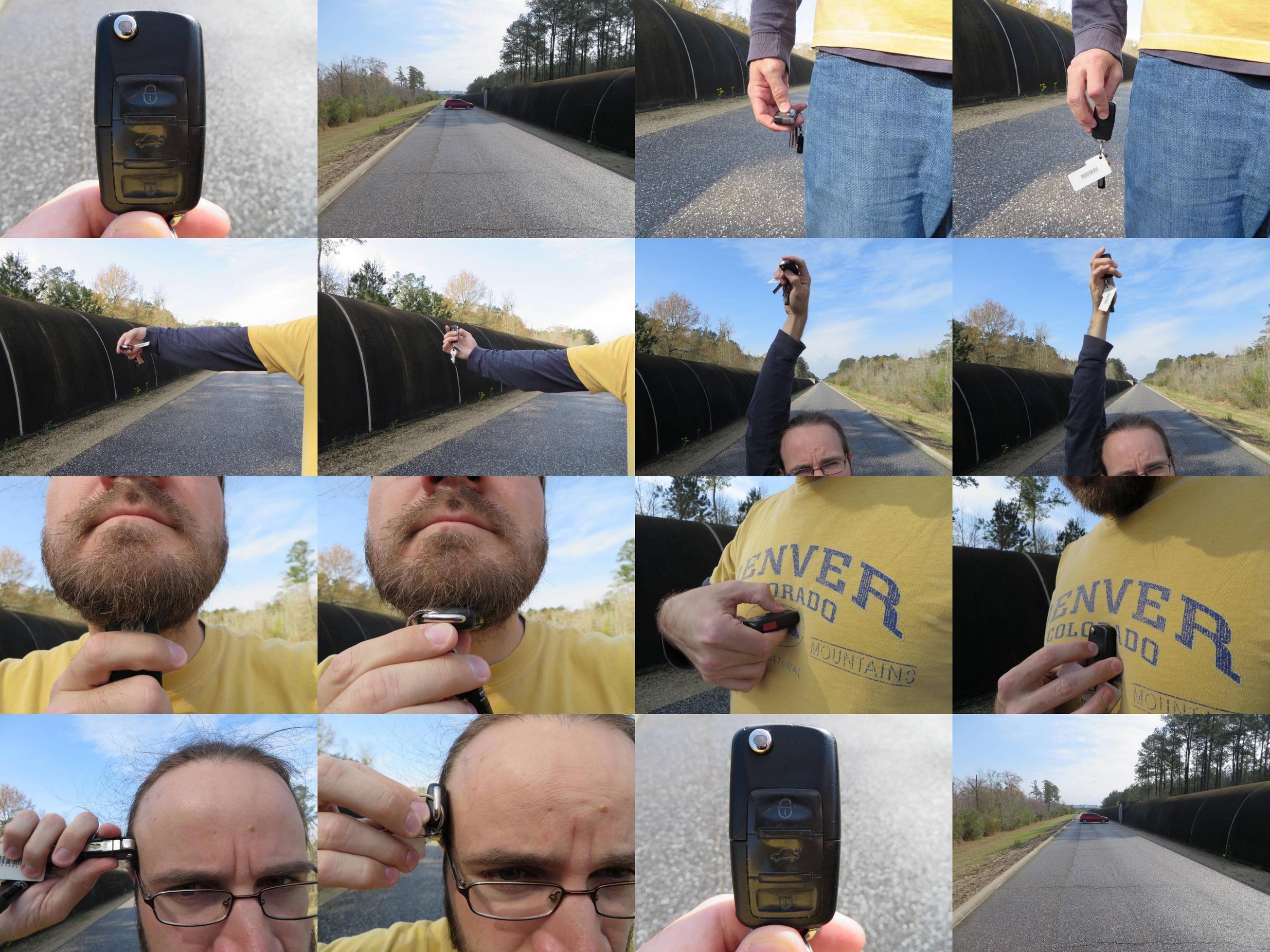 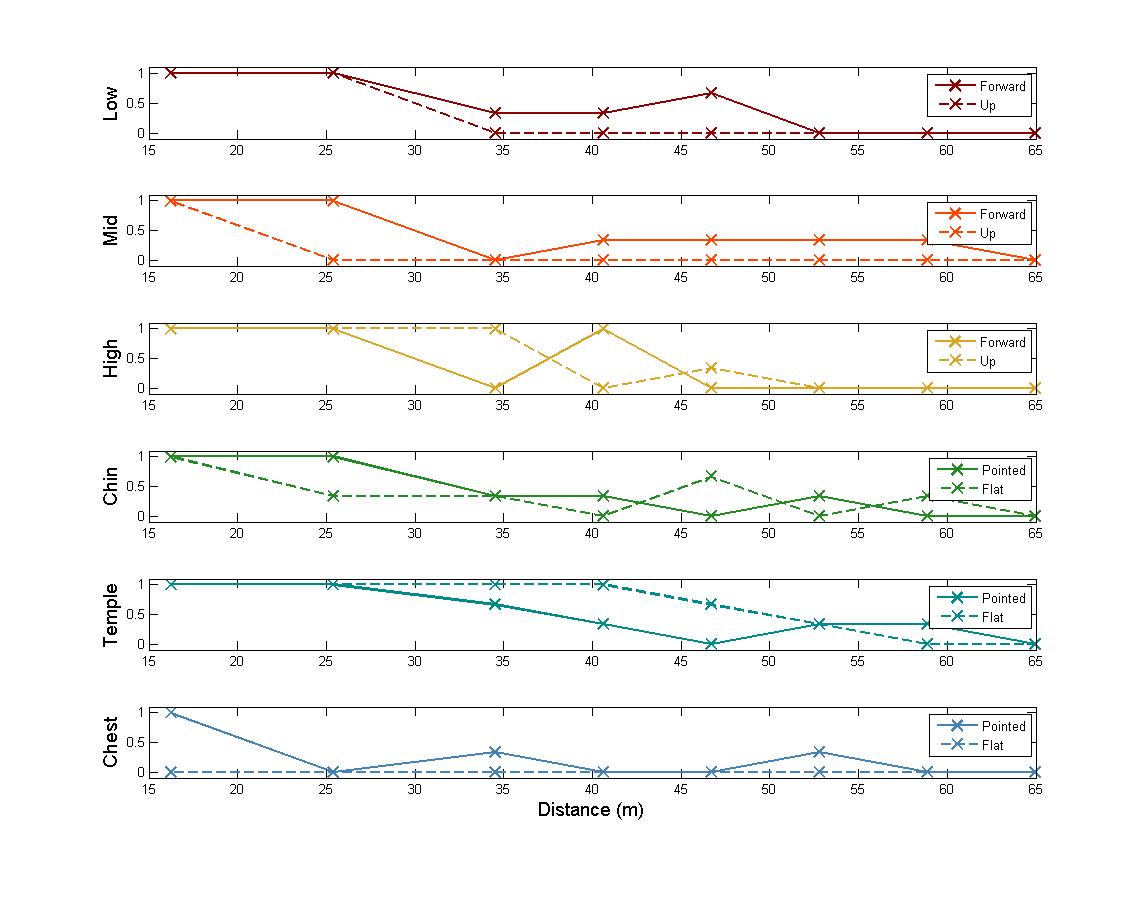 However, the convenience comes at a big price - the tiny loop antenna inside is extremely inefficient, transmitting less than 10% of the energy pumped into it, while the rest is simply converted into heat.

When holding your remote to your head, your arm, shoulder and head form a much larger "body loop" antenna which is almost 100 times more efficient than the remote's antenna.

The magnetic coupling between these two antennas is not great, but it's good enough to make the combination antenna around 2x to 3x better than the remote alone, resulting in a notable improvement in operating range.

The way it works has nothing to do with your body. Remotes have their antenna as a more or less circular trace on the board (a loop antenna). The strongest signal is when the top or base of the remote is pointed at the receiver. The weakest signal is when the fob is pointed 90 degrees away, such as when pointing it like a TV remote. Guess which way most people point it? Guess which way it's pointing when you hold it to your chin?

While this may not provide the full answer. This video will help to explain how water acts as an amplifier for the signal.

I don't think that holding the fob to the head does much good, but what does make a huge difference is holding it high up. The simplest flat plane multipath reflection model predicts that the received power is proportional to $$\left(\frac {h_1 h_2}{R^2}\right)^2$$ where $h_1$ and $h_2$ are the heights of the transmit and receive antennas and $R$ is the distance between them. Antenna height makes an enormous difference in reception quality. (Also at lower heights there is much more scattering from everything around that is ignored in the formula.) Absorption loss is almost nil at usual fob frequencies. A small (relative to wave-length) antenna does get detuned by reflective (metallic) bodies in their neighborhood (within a wavelength, or so, 450MHz ~ 66cm) but the antenna pattern (radiation shape) does not change much by absorbers nearby it except in the direction of the absorbers themselves. A human body being mostly salt water is a lousy radiator and reflector but not the head that is a pretty good dielectric compared to the rest.

Unfortunately I can't remember where I read this, but I recently read a theory/explanation that it's merely because the key is being held higher up.

The folks at Remcom set out to debunk this myth. https://www.remcom.com/examples/keyless-entry.html

They ended up showing why it works. Great software, I've designed a bunch of 2.4 GHz antennas with it that worked quite well in significantly impaired environments.

Are you sure holding it to your head really makes it better? Your experiment is very poorly designed because you have only sampled instances where the remote wasn't working when your head wasn't in the picture. This is blatant selection bias.

No doubt, putting the remote near your head (or anything else conductive) will significantly alter the electromagnetic radiations of the remote. But is it better, or just different? If it wasn't working to start, then you changed something, then it worked, that doesn't mean it's better. You need to also try holding it to your head, then find instances where that doesn't work, then try using the remote normally.

It's a common flaw in human reasoning at work here. People like to attribute success in some random or complex process to some ritual (in this case, putting the remote on your head) rather than simply realizing the success was due to an unrelated perturbation of the system, or simply another trial. Here's a familiar (at least, to people of the right age) instance of this flaw: 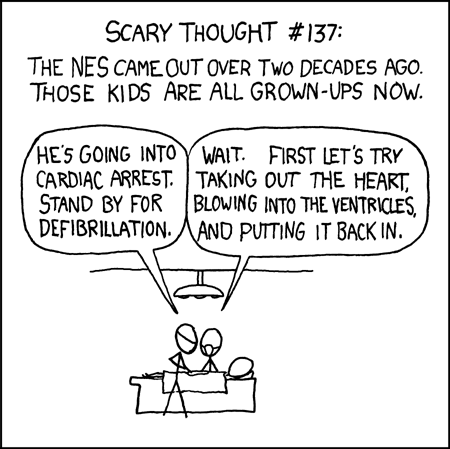 The NES had game cartridges that were notoriously unreliable. The culprit was a cheaply designed electrical contact. Child wisdom had it that taking the cartridge out, vigorously blowing into the cartridge, and putting it back in would fix it. Each clan of children probably had some variation on this ritual, with important details, such as pushing the cartridge up and down a couple times, shaking the cartridge, leaving the door open, pressing the reset button multiple times, and so on. In reality, removing and re-inserting the cartridge and rebooting the NES just introduced another trial, and eventually it worked. The rest is insignificant ritual and superstition. (But don't tell any kids from the 80's that -- they won't believe you!)

That's not to say it's not possible your head does improve the remote's range. Indeed, your head will be inductively and capacitively coupled to the antenna. Significant RF currents will exist in your head, and some of this energy will be radiated, and your head will radiate differently than the antenna in the remote.

The point is we don't know. All the research I've done turns up anecdotal evidence at best, by people who are not RF engineers performing similarly poorly designed experiments, or people who have talked to "an expert". I've never seen data collected by a qualified engineer with proper test equipment.

Not the answer you're looking for? Browse other questions tagged electromagnetic-radiation everyday-life frequency wavelength or ask your own question.

0
How can a skull/head works as an 'amplifying' antenna?
12
How does my hand amplify an FM radio signal?
10
Why does my body create interference with my clock radio while in bed?

7
Why do car keys have longer range when held next to your head?
8
What made the keys in my pocket so hot?
0
Laser vs Transmiting antenna
4
Are cars really Faraday cages: An anomalous observation
2
When you have engine at idle and turn your car, where does the kinetic energy go?
3
Where do the air bubbles inside the pool come from?