What are circles on broth (eating soup) surface?

Think about broth in the soup, usually it has circles on its surface. What are their properties? Why there are many of them (not a few big blobs)? Are they depended on liquid's temperature? What needs to be added to water so these kind of circles appear?

I can only guess that it is because of oil in the broth, and shape is due to tensions on the surface; is that correct? 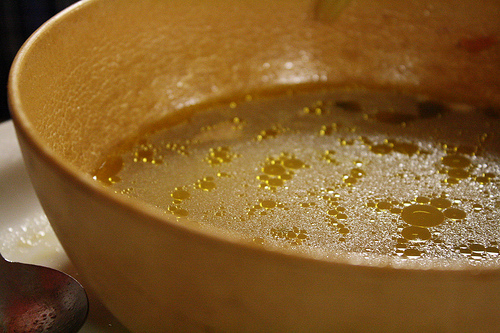 The circles are droplets of fat (triglycerides: triesters of glycerol and fatty acids). The two phases (water and fat) are immiscible because the water molecules are more attracted (hydrogen bonded) to each other than to the fat molecules.

Absent gravity, energy would be minimized by the droplets being spherical, but gravity flattens the droplets. The surface tensions of each pair of the three phases (air-water, air-fat, and water-fat) would be needed to quantitatively describe the situation.

The droplets being seperate is not the lowest energy state. However, surface tension must be overcome for the droplets to coalesce.

If the soup is refrigerated, the fat droplets usually solidify.

The fat droplets usually come from meat in the soup.

Not the answer you're looking for? Browse other questions tagged everyday-life surface-tension optimization water or ask your own question.

1
Causes of surface tension between two fluids
2
What is a good model for computing water dropping on a surface?
0
What could be added to tap water to reduce air bubble formation on a submerged object?
0
What is the fastest way to heat my car?
3
Why are the "bubbles" at the edges of my soup so large?
0
Bubbles (water) are transparent, then how can they produce white light in mass amounts?