Nuclear physics problem, Why do we use high weight atomic elements?

So as far as I know, nuclear fission uses high weight atomic elements to manufacture power. If the risk of runaway reactions are a major reason for not expanding this technology, why don't we use elements with lower atomic weight (eg. less energy) or lower amounts of fuel (eg. less total mass)?

The nuclei used are the ones which can be fissioned in a chain reaction!

The lighter ones You think of will not split. That's simply a result of experiments.

This is a graph of Binding Energy per nucleon for the various nuclei. 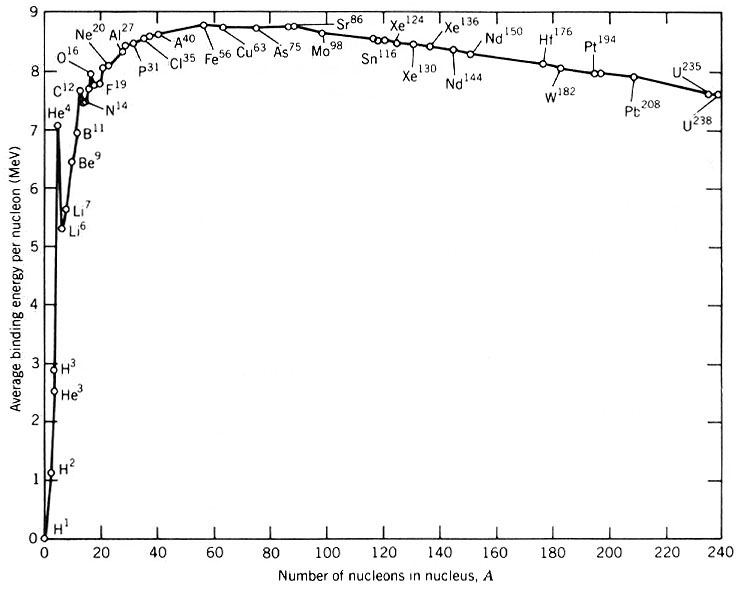 The fission of heavier nuclei would lead to daughters with higher binding energy than the parent (graph slopes downward towards the high mass end). Daughters will be stable, hence energetics favors fission for heavy nuclei.

This answer address fissionable nuclei, i.e elements heavier than iron. It has received justified criticism that this actually does not explain why certain nuclei are "fissile" (i.e nuclei that undergo fission when struck by slow thermal neutrons). After reading the question, I realize that the OPs concern was really with fissile materials. So I apologize for the initial answer which concentrated on fissionable nuclei.

The answer, btw, is still energetics. Wikipedia is a good starting point to get an explanation.

Nuclear fission uses large atoms splitting apart to generate energy. Only large atomic nuclei are unstable enough for this to happen at any appreciable rate

Not the answer you're looking for? Browse other questions tagged nuclear-physics nuclear-engineering power or ask your own question.

2
How can nuclear fusion release energy (even in principle)?
0
Nuclear Fission and Fusion

55
What practical issues remain for the adoption of Thorium reactors?
28
How would a black hole power plant work?
13
Nuclear physics from perturbative QFT
11
How to explain $E=mc^2$ mass defect in fission/fusion?
58
Why is technetium unstable?
0
How long is spent nuclear fuel radioactive?
0
Was it possible for Little Boy to have predetonated and fizzled?