I am a Math Grad student with a little bit of interest in physics. Recently I looked into the Wikipedia page for Simple Harmonic Motion.

Guess, I am too bad at physics to understand it. Considering me as a layman how would one explain:

associated with it? Can anyone give examples of where S.H.M. is tangible in Nature?

This is all about potential; it is common that a particle movement is described by a following ODE:
$m\ddot{\vec{x}}=-\nabla V(\vec{x})$,

where $V$ is some function; usually one is interested in minima of $V$ (they correspond to some stable equilibrium states). Now, however complex $V$ generally is, its minima locally looks pretty much like some quadratic forms, and so the common assumption that $V(x)=Ax^2$... this makes the last equation simplify to:

with solution in harmonic oscillations.

The common analogy of this is a ball in a paraboloid dish resembling potential shape; it oscillates near the bottom.

Simple harmonic motion (SMH) describes the behavior of systems characterized by a equilibrium point and a restoring "force" (in some generalized sense) proportional to the displacement from the equilibrium.

A simple mechanical system with this behavior is a mass on a spring (which we will consider in one dimension for ease). There is some point where the mass is stable: it can be left alone with no external forces on it and will not accelerate. That's the equilibrium, call it $x_0$. If you move the mass from that point, the spring exerts a restoring force $F = -k(x-x_0)$. Here $k$ is a property of the spring called the "spring constant"; a stiff spring hs a high spring constant and a weak spring has a low value for $k$. Lets consider the special case where $x_0 = 0$ (with no loss of generality, but just to keep the number symbols to a minimum).

which is a second order linear differential equation, the solutions to which are of the form you exhibit above (where $A$ and $\phi$) take the part of the two constants of integration needed to make the solution agree with an arbitrary set of boundary conditions.

The thing that is important about SHM is that these restoring "forces" linearly proportional to "displacement" (which we allow that there may be generalized meanings for both "force" and "displacement") are very common in the universe. So a great many phenomena may be described this way (and even more may be if we limit ourselves to small perturbations).

I guess this thread shows everyone has their own tastes when it comes to this topic!

First of all, it's called harmonic motion because sine and cosine are the elementary harmonic functions. Recall that in general a harmonic function is a solution of Laplace's equation (which shows up everywhere in physics), and in we initially study $sin(x+vt)=sin(kx+\omega t)$ since these are the building blocks of solutions of the wave equation. In QM, the principle of superposition (from ODE's) takes on an entirely different, physical meaning.

It's also obvious that the equation of harmonic motion is the projection of $e^{i\omega t}$ onto the real axis, which is a standard trick to derive this equation.

Another important example is that the EM field can be considered as three space where each point is a quantum harmonic oscillator. In fact, the EM field is quantized by considering the Fourier components of the field to be creation and inhalation operators for photons of a given frequency $\omega$, which are exactly alike to the raising and lowering operators of the QM harmonic oscillator.

The final standard remark is that almost all small oscillations in nature can be approximated by $F=-kx$, by a Taylor expansion of the force $F(x)$ to first order in $x$.

This echoes some of the other responses, but simple harmonic motion is universal in the following sense. A system displaced from equilibrium will exhibit some force (possibly zero) as a function of the displacement. "Equilibrium" means that if x is the displacement coordinate, then the response force F(x) obeys F(0)=0. So if we Taylor expand F in x we get F(x) = 0 + F'(0)x + F''(0)x^2/2 + ..., where here x can be a multi-coordinate, F vector-valued, with F' a Jacobian, etc. The point is that for small displacements, the linear term is a good approximation (it is nonzero generically, but not always) and the equations take the form d^2x^i/dt^2 = \sum_j (dF^i/dx^j)(0) x^j. This linear system is reducible to copies of simple harmonic motion if we can diagonalize the matrix F'(0) (e.g., if the force is conservative this is symmetric, a Hessian, and therefore diagonalizable). This same reasoning works in infinite dimensions, formally, so in quantum field theory. If you want an everyday example, kick a wall. It will shake. This is why.

Simple harmonic motions are designated by that name because the time dependence of the coordinate being described is given by a constant multiple of a sine or cosine function of a multiple of the time, i.e., a harmonic function in the sense of being the kind of function employed in the harmonic, or Fourier analysis of a periodic, but otherwise arbitrary motion in terms of sinusoidal functions.

The importance of simple harmonic motion stems, first of all, from its pervasive presence throughout macroscopic nature as the characteristic response to small disturbances from equilibrium which produce restoring forces proportional to the disturbance. Beyond that, and as indicated in the previous paragraph, almost all varieties of motion are analyzable as superpositions of simple harmonic motions of varying frequencies and amplitudes. Such analysis is just what we call Fourier analysis of the motion.

Anywhere there is a restoring force which is linear with some kind of pertrubation from equilibrium, harmonic motion occurs. Most dynamic systems ehibiting either elastic forces, or some kind of conservative field (like gravity) have a tendency to exhibit harmonic motion. I guess you can view it as the natural dance of potential and kinetic energy.

An example we used in high school was a cork floating on the surface of water vertically. Starting from the position where all is in equilibrium, a small dip of the cork increases the boyancy linearly, and a small rise of the cork decreases. Since the sum of the forces are zero at equilibrium then changes in boyancy are viewed as an additional opposing force to motion that is linear.

A practical application is the measurement of mass moment of inertia of an axisymmetric shape. You suspend the shape from a thin elastic wire and twist it slightly. The resulting oscilation back and forth is S.H.M. and its period is used to calculate what the MMOI around the axis of rotation is. There are companies out there that part of quality assurance for manufactured parts, they run samples through this "simple" test to check the expected performance in the field. 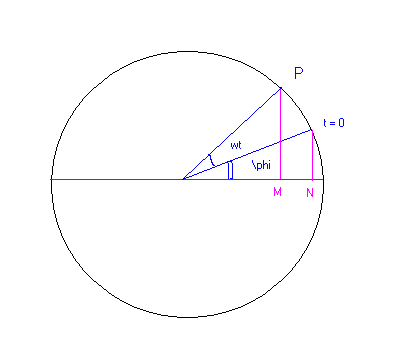 Consider a particle in circular motion with angular velocity $\omega$ and radius of the circle $A$.

Projection of the particle on diagonal of the circle is in SHM.

I was once trying to push a large log off a hiking trail trail. The log had been there a while and had sunk into the dirt, so to push it out I would have to push hard enough to force it up out of the depression. I kicked at it, but couldn't kick it hard enough to get it out. I was with a couple other people, so we all kicked it, but again we couldn't get it out. What did happen was that it rolled up a little way out of its hole, then rolled back towards us and climbed a small way out of its hole in the opposite direction. Finally it rolled back the way we originally kicked it again.

We soon caught on to the idea of kicking the log, waiting for it to roll back towards us, then roll the other way, and kick it again while it was already rolling the direction we wanted it to go. With a little effort, this strategy finally let us roll the log out of its depression and off to the side of the trail.

The log was exhibiting simple harmonic motion - it shook back and forth at a certain frequency, oscillating around the spot it would stay at rest. Our kicks were timed to coincide with the period of the log's oscillations. This is called achieving "resonance".

The log was not a perfect simple harmonic oscillator because it would only shake back and forth a few times before settling down again. Ideally, a simple harmonic oscillator will shake back and forth indefinitely. Further, it can shake more or less vigorously (different amplitude of the sine wave), but it will always have the same period and move sinusoidally.

Nonetheless, these models are extremely useful at explaining natural phenomena. A large body of water like a lake or bay is a simple harmonic oscillator in the same way as the glass of water pushed across the table to excite the sloshing mode. But the period of the sloshing mode gets longer and longer as the body of water gets bigger. For the Bay of Fundy, the sloshing mode is very close to twelve hours. Since the tides come once every twelve hours, the tides act in a way very similar to the way my friends and I kicked the heavy log out of its hole. The tides build up very strongly, and tides there can be ten meters!

Engineers will have to worry about this resonance phenomenon all the time. The most famous example is the Tacoma Narrows suspension bridge, which started shaking wildly and finally collapsed on a windy day when the turbulent eddies of the wind were in resonance with the bridge. If you're building a building, you don't want it to undergo simple harmonic motion at the same frequency as earthquake waves, and you don't want the suspension on a car to have the same frequency as some sort of regular dip in the road, for example.

Not the answer you're looking for? Browse other questions tagged homework-and-exercises newtonian-mechanics harmonic-oscillator or ask your own question.