Pouring water in an aircraft while upside down?

What is the physics behind the following photo?

Someone had told me that this is because the aircraft might be moving towards a lower altitude, but I am still not sure. 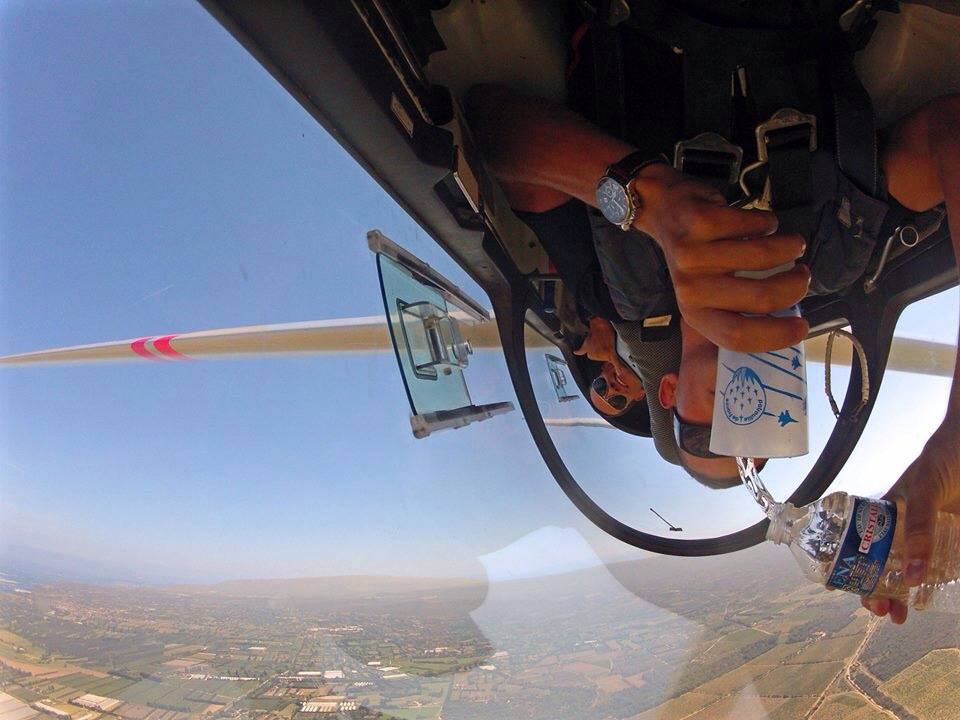 Edit: My language is "sloppy" (I like talking physics in "lay person" terms so anybody can understand) but @dcmkee made really nice comment clarifying my answer for the more advanced people. Thanks @dcmkee!

Since the plane is in a loop there is significant g's due to centripetal acceleration. The water was being accelerated upward$^{1}$ with a high velocity then the plane keeps "looping" and the water tends to want to stay in the same direction (upward) and so the water gets released upward! While the plane/start moving horizontally. Its just the plane and people are moving in a way that are essentially "falling" faster than water so it seems (or feels to the people in the plane) that gravity is actually pulling them upwards. Essentially the loop essentially created 2g's of gravity in the upward direction so water pours upward just as it would on earth. (2g's upward minus the one g downward of earth equals a net g upward).

1 By accelerated upward I mean it was initially traveling horizontally then changed its direction upward (if uniform circular motion then its purely centripetal acceleration).

It doesn't actually have anything to do with the plane being upside down, or even changing from a vertical direction to a horizontal one. It's purely the vertical velocity that's at play here.

Imagine water being thrown upward. You know what, imagine a fountain, a really big fountain. As soon as the water leaves the underground pump, it starts falling back down to the ground, even if it's still moving upward at first. Now imagine the plane, moving straight down. And it's accelerating, so it's "falling" faster than the water can. That means the water is moving relatively upwards to the plane, even if it's really falling.

And it doesn't really matter if the water was pumped up from the ground, or if it was transported up by the plane; its behaviour regarding the gravity is still the same.
So the water is still moving up, while the plane is already moving down, because the plane has an engine while the water doesn't.

At the moment the picture was taken the plane, with mass $M$ was performing an inside loop, and was almost exactly inverted. It was moving at a speed $V$ in a vertical circle with radius $R$; both of these are chosen by the pilot as he execute the loop.

The physics of circular motion requires that the plane experience a force towards the centre of the circle, $F_c$, given by:$$F_c=\frac{MV^2}{R}$$At the moment of the photograph, this required inward force is also a downward force. The downward force of gravity could have been just enough to supply this centripetal force (see Vomit Comet) but in the circumstances of the photo, an additional downward force was needed. It was supplied by the air acting against the wing and its control surfaces, as adjusted by the pilot.

This inward force was transmitted through the structure of the aircraft, the seat, the pilot's body, arm, and hand to the bottle and its contents, so everything was moving in the same circle.

Then the pilot tipped his hand, the water moved, went out the neck of the bottle, and was in free fall. No extra force from the wings, just gravity. But the cup was experiencing both the force of gravity and the wing force (through the pilot's other hand), so the cup accelerated downward more quickly than the water, caught up with the water, and contributed a downward force to the water, so the water stayed in the cup for the rest of the loop.

Or it was Photoshopped :)

the physics is the same as to why the pilot and passenger are not suspended on their seat belts: they're pressed to their seats by centrifugal force, the same force that makes water fall upwards

Actual aircraft attitude (inverted with respect to the ground, in this case) is irrelevant. All that matters is that for the few moments long enough to pour the water and snap the picture, the aircraft is experiencing some positive g-load (pilot feels that he is pushed into his seat). The aircraft could be in a barrel roll or a loop. Either way, it is in that moment accelerating toward the ground at something greater than 1g (free fall plus enough extra to help the water pour). The illusion of water pouring upwards comes from the fact that you are looking at a static image of the event and inferring (incorrectly) that the aircraft is in straight and level inverted flight, which it isn't (disproven by the direction the water is flowing).

The truth of the situation might be a bit better revealed by seeing a full-motion video instead of a single static frame, better still to see the flight path of the aircraft from the outside.

A well executed barrel roll maintains the force balance you experience at rest with "gravity" oriented in the direction you experience as "down" (that is the direction from your head to your feet) due to centripetal acceleration. If you weren't looking outside, you might not realize the roll even took place (if the pilot is good).

Not the answer you're looking for? Browse other questions tagged newtonian-mechanics forces newtonian-gravity centrifugal-force centripetal-force or ask your own question.

6
MotoGP motorcycles lift front wheel while exiting curve
6
What provides the centrifugal force for planets orbiting a star?
1
Toy helicopters at very high altitude
83
Does centrifugal force exist?
0
Centrifugal effect on effective value of gravity
1
Centripetal force and vertical motion
0
Is Upside-down Racing Possible?
3
How can the Normal Force on an upside down roller-coaster car point upward?
1
How can a bicycle keep its momentum while changing direction?