Is there a general law for physics?

Here is why I pose this question, as I advance in physics more and more this idea haunts me and in fact helped me figure out and memorize many physical laws. It seems to me that there is a relation between all the laws of physics, something that is a general law that determines how should all other laws be generally stated. I can't express this law in a complete sentence and I'm not able to verify if it has an exception or not but I will try to explain this by examples to show what I really mean:

Oscillations: It seems that the whole process happens because the object is trying to get back into its initial state i.e the origin. 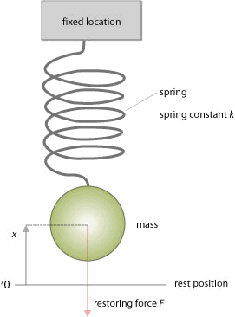 in other words: the current is trying to get its initial state by resisting the change of current.

Radiation and Nuclear reactions happen because the atom is trying to be stable.

Of course there are many other examples but I'm just stating few to make my point. The question is: is there something like that in physics? if not can you give me any counter example on this?

The principle of stationary action is what you're looking for.

$$\mathcal{A} = \int\limits_{t_1}^{t_2} \mathcal{L} (x,\dot{x}) dt$$ It is called the action, and it's the "thing" nature tries to minimize or, more precisely, to make stationary. What does that mean? Well, it means that, for a particular system, nature chooses such a Lagrangian, which will give a stationary value when integrated between two fixed points.

So, as you might have guessed, the goal of the game is to find the Lagrangian which will minimize (stationarize?) the action.

The Lagrangian for a particle on a line is an extremely simple case, in general it doesn't have to be kinetic minus potential energy and, generally, it's also an explicit function of time, which means that some terms can depend on time not just through position and velocity depending on time.

Try out the equations on my example of a particle on a line.

Although the Lagrangian is also used in quantum mechanics, there's an even more elegant concept, the Hamiltonian and Hamiltonian mechanics formalism, which basically sets the rules.

Bottom line, you can view it as this: $$\text{constructing a theory} \longleftrightarrow \text{finding the Lagrangian}$$

If you want a classical intuition for why is it kinetic energy minus the potential energy, you might want to read the article "Gravity, Time, and Lagrangians", Huggins, Elisha, Physics Teacher, v48 n8 p512-515 Nov 2010.

Well, there is at least a principle which states that system "tries" to minimize it's energy.

As was also mentioned in comment above, in general I believe there is just Principle of least action, from which one can also derive conservation laws which are neccessary consequence of Lagrangian symmetry - Noether's theorem. (Action is integral of a Langrangian over time).

Although there's no consensus, I think that the vast majority of my physics colleagues would answer your question with a "yes", but acknowledging that we don't yet know for sure what that general law (jocularly referred to as the "Theory of Everything" or ToE) is. The above-mentioned principle of least action is a good start, but it's not the final word, since it's for classical physics only. It can be elegantly incorporated into quantum mechanics using a mathematical tool known as the path integral, but we physicists as a community have still not succeeded in unifying quantum mechanics with Einstein's general relativity into a theory of quantum gravity that we can fully understand and test against experiment. String theory and loop quantum gravity are two popular competing contenders, but the jury is still out.

Schlomo Steinbergerstein mentioned a stone-age paper of mine discussing these issues, but I discuss all this in much more detail in my new book http://mathematicaluniverse.org

First of all, objects and systems don't have agency: they don't try to do anything. Second, we need to be clear about what's happening in each of the examples: For springs and every system in equilibrium, it turns out that the potential has a low spot where the system has landed. In the case of a pendulum, the potential is actually circular, but we approximate it (to pretty good accuracy in the right conditions) as a parabola. In the case of a spring, the potential is parabolic until you get into the plastic deformation regime. It turns out that many potentials are parabolic when they are close to equilibrium: see Taylor Series.

For electrons on atoms, we have $\frac{1}{r}$ potentials and $\frac{1}{r^6}$ for Van der Waal's forces. It might feel funny that these potentials have a negative infinity point, but that doesn't change the fact that there is an equilibrium position. On the subatomic scale, we have to infer the shape of the potentials and things are pretty complicated, but all things that exist have found an equilibrium, or are on their way.

These two scenarios have an equilibrium position which is very different from the Lenz's law example you give where there is an equilibrium velocity.

Last, if you're looking for a Theory of Everything, we've found symmetries (which may be exploited with the Principle of Least Action), a speed limit for information and physical implications from the laws of large numbers. None of these prepared us for the profusion of particles that we found once we started looking for them and none of these laws have sufficiently explained the galactic rotation curves we see or why the universe's expansion is accelerating. In other words, a theory of everything must account for everything, and we can't - even with these 3 broad theories, explain everything.

No. Otherwise physics would have been nothing more than application of mathematics.

The closest to general laws is the summery. The conservation laws come from symmetry of different kind. Google for symmetry and momentum conservation for example.

No. In your examples you imply a will of objects for stability. There is no such will and the examples are select by the fact they show stability.

Have a look at the second law of thermodynamics (I name it Death)...

It is not clear what your General Law is, because you have not shown how the three examples are related.

I don't think there is anything profound about this. It follows from the concepts of stable and unstable equilibrium.

As for the 2nd example, the wikipedia page states that

Lenz's law can be seen as analogous to Newton's third law in classic mechanics.

It is not clear how this idea is related to a equilibrium state.

I think the most real general law in our current physics is: physics strongly favors behavior that can accurately and reliably be described by mathematics. There is no particular reason why the symmetry-breaking model at the top of this site should be a useful description of something that has actually happened, might have left comprehensible evidence of its occurrence, and could be coherently discussed as a sequence of causally linked events, except that reality seems to actually work that way.

Not the answer you're looking for? Browse other questions tagged theory-of-everything or ask your own question.

3
Help understanding the potential outcome of solving the Unified Theory in modern physics
6
Can all laws of physics derived by a single or lists of more general laws?
2
What is high energy physics?