How many celestial bodies could be in stable orbit at roughly the same distance from a star?

How many planet-like celestial bodies of roughly the same mass (say within 50%) could orbit a star at roughly (say within 10%) the same distance from the star and be in stable orbits. By stable I mean they would not require tethers or significant energy to stay there.

I feel sure the answer is at least 2, Earth plus another body at Lagrangian Point L3. I have heard it's not 3 -- that putting Earth-size bodies at Earth's L4 and L5 would destabilize. Is that true? Please explain concisely and cite reputably. I'm asking in the interests of Earthling living space within the solar system, in the far future of course. (Or other stellar systems in the uber far future.)

Thanks to @dgh for steering the terminology away from "planet" which is defined by the IAU as having cleared its neighborhood (i.e. orbital radius) of other bodies.

EDIT - Here's an excellent tool for playing around with this idea. (Though more visually than mathematically - Kids don't try this on your home planet.) Stefano Meschiari's Super Planet Crash game: 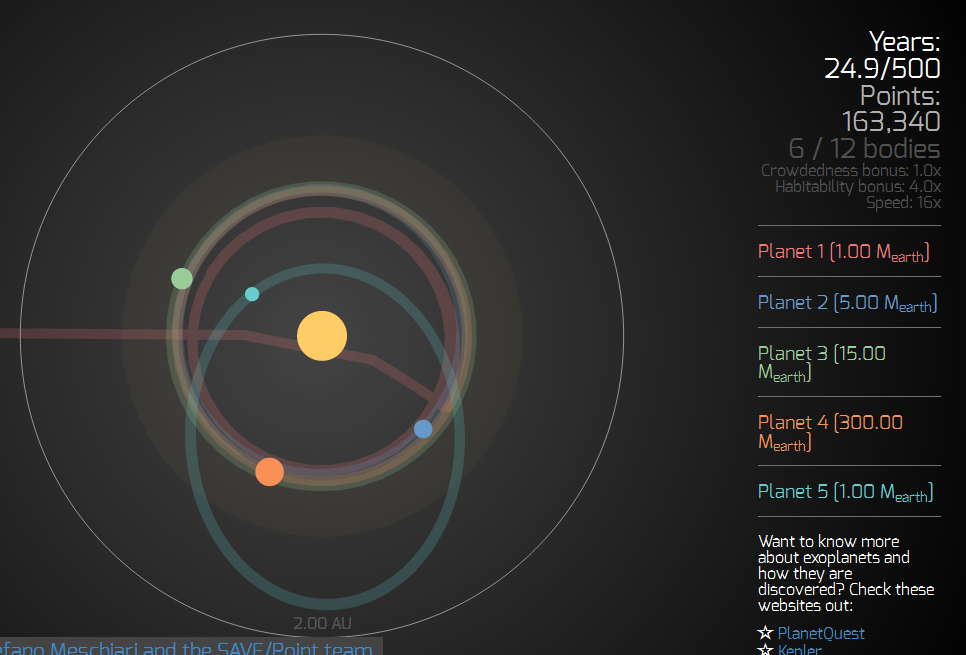 Note the untimely and unfortunate exit stage left of Planet 1, at what appears to be chillingly in excess of solar escape velocity. In the above simulation, 5 planets of varying sizes started out in the habitable zone, and stayed quite orderly for almost 25 years: they varied in distance from each other but stayed remarkably equidistant from the sun. The rerun seems to play out differently each run, due to butterfly effects I suppose.

On the other hand, the following is an 11-planet simulation that was stable for over 500 years: 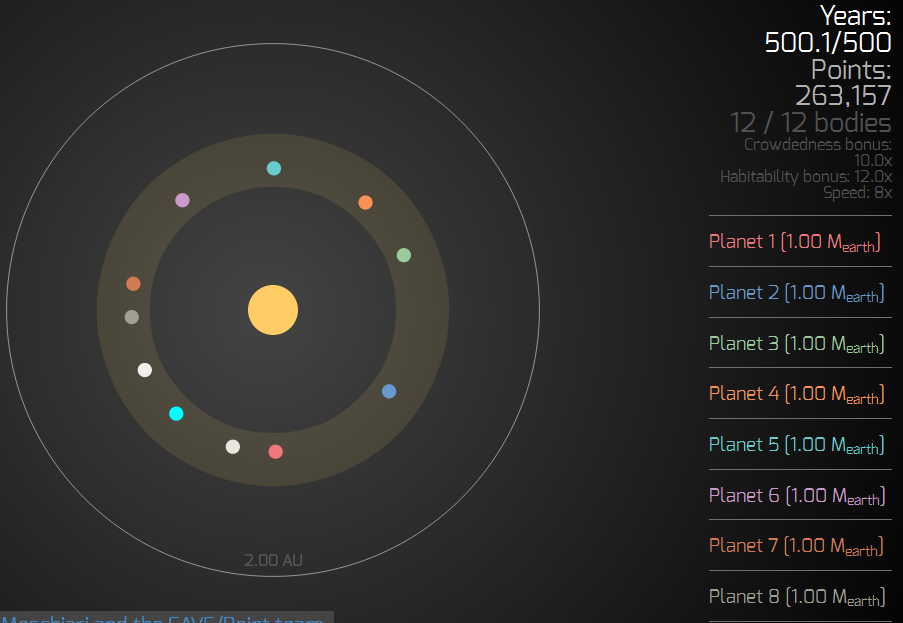 I just clicked out the planets at the same distance to the sun, and they stayed there. This apparently defies the quote above, that the Klemerer Rosette is "no more stable than a ball on a hill". It may not sustain forever, but some dynamic could be observed keeping these 11 bodies apart.

I suspect that the answer is two Earth-sized planets.

This is trivially the case if you allow them to occupy the two stable Lagrange points of a Jupiter-sized planet. The theory behind the Largrange points assumes a stiff mass hierarchy for the three bodies, $M_1 \gg M_2 \gg m$.

Saturn's moons Janus and Epimetheus occupy a horseshoe orbit. This is an interesting case where the two moons (with a mass ratio of about 4:1) are at nearly, but not exactly, the same distance from Saturn. After several thousand orbits, the inner moon catches up to the outer moon; however, rather than colliding, the moons do a little do-si-do and trade which moon occupies the smaller orbit. Then the previously-outer moon moves ahead and catches up with the previously-inner moon after another few thousand orbits, when the do-si-do is reversed. If I read the Wikipedia article correctly, the next exchange should occur sometime in 2014.

The horseshoe orbit seems to be a stable configuration. I suppose it's possible to put four equal-mass objects into horseshoe-type orbits, if they alternate distances: the first and third objects could be on the outer track, and the second and fourth objects on the inner track. The horseshoe exchanges would take place on opposite sides of the central mass — initially, at least. However, I suspect that this configuration would be unstable for the same reason that $L_3$ is unstable; eventually you would wind up with three equal-mass objects quite near each other, and you'd probably have either a collision or an ejection.

There's an extra degree of freedom if you allow the orbits to be not quite coplanar. The Iridium satellite constellation you mention (which is actively stabilized) occupies six different orbital planes. Analyzing that stability is quite complicated, and I suspect it doesn't buy you much.

Not the answer you're looking for? Browse other questions tagged newtonian-gravity orbital-motion simulations planets stability or ask your own question.

4
Solar System Capture of Orphan Planets
6
Frequency of nomad planets passing within 30 AU of the sun
4
How to calculate linar velocity of planet orbit?
10
What if the Moon was 100x more massive: Binary planets?
6
Stability of Laplace resonance
1
How do scientists tell us the mass and size of planets and stars $20\,{\rm ly}$ or more away?
1
Orbit of Celestial Bodies
2
Can a satellite have one axis horizontal to its host, and spin about that axis?