I have read online in numerous places about the possible existence of toroidal planets, and I most people seem to believe that they could exist, but they also have no evidence to support this claim. I recently did a project in which I calculated the gravitational field around one-such planet, and I would like to continue working on it to either prove or disprove the possibility of these planets.

Before I continue, I would like to know if any mathematically rigorous investigations into this question have already been conducted. I have searched, but I haven't found anything on planets, only black holes.

I posted an answer to a similar question here:

The wording there was pretty much asking for a broad description of the physics (which come down to bifurcation possibilities) up to, and including, the topology changes of the planet.

The paper I linked to seems to be pretty much the state of the art on this problem. Calculations producing some of the shapes within this set were reproduced by the io9 link someone gave: 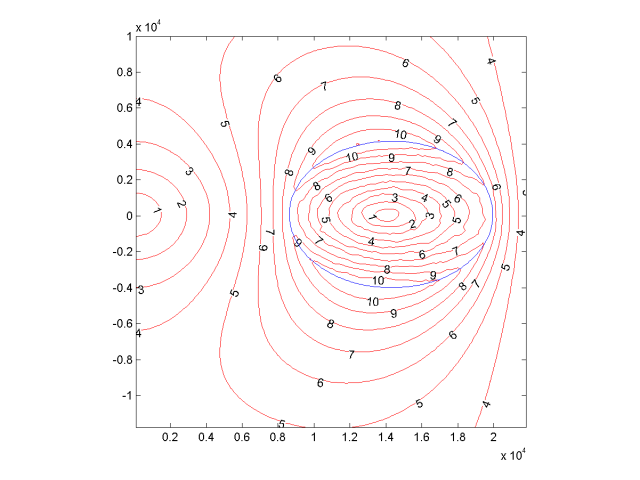 As you can see, it's not exactly a torus (although upon later inspection, it looks like this might be a simple rotated ellipse, in which case I'd file it away in "wrong approaches"). This is expected, because the field distribution for a single ring of wire or gravitational mass in Newtonian gravity is extremely well understood. With certain limit-case assumptions, you can also divide the problem up into 2 components - one analogous to an infinite line, and one for the exclusively radial field from the global dynamics. But that method is approximate by definition. An infinite line of mass would obvious be a perfect infinite cylinder under the assumptions for how planetary mass behaves. It's that radial field that causes the shape to be somewhat egg shape.

The author says that he used a Monte Carlo method of randomly placing ring sources of mass within the interior of the thing. The equation for the ring is well-know, so this is a fairly obvious method. What's not obvious is how you perform an iteration between the surface and the field. How do you even define the curve of the planet's surface in the first place? I worked on this problem a little bit myself, and I've seen multiple wrong solutions online, so I'm quite skeptical if there isn't obvious voluminous work behind it. I have asked the author of that article about these details. So far, I have not received any response.

There's no better metric for the scope of the problem than the question on this site, Why is the Earth so fat? This was only concerned with a tiny tiny limit case problem. It involved a lot of numerical attempts, and the solutions weren't actually all that good in terms of accuracy.

In fact, the Monte Carlo approach has some serious issues. If you're testing the field/potential close to the surface of the planet, you'll almost certainly blow up numerically. The problem is that the field/potential could easily be infinite if a point just happens to be randomly selected very very close to the test-point on the surface. Maybe you'll just de-tune it a little bit. But then you need this very value in order to get to do the iteration on the surface profile!

I recently did a project in which I calculated the gravitational field around one-such planet, and I would like to continue working on it to either prove or disprove the possibility of these planets.

At the risk of being condescending, I'll venture a guess that you did a numerical approximation of the thin ring case? We have an explicit solution for that, and it's the bread-and-butter of the more advanced investigations. Maybe I'm wrong, I honestly have no idea what you've done. But in terms of your interests:

have read online in numerous places about the possible existence of toroidal planets, and I most people seem to believe that they could exist, but they also have no evidence to support this claim.

The first case hasn't been clearly ruled out yet. It's like the search for life on Mars. They might be out there, but I wouldn't hold my breath for discovery. Within the next 30 years, with the way that planet hunting has been progressing, we'll probably settle the question. So that's a good problem to get involved in. Maybe you could use it toward a degree, but it's certainly not a career.

But for the latter case, it's obviously possible. The stability requirements aren't nearly as restrictive as what some people make them out to be. Large torus plants are unstable in the most obvious sense. They're still locally stable, or at least that's what my money is on. But it's extremely tenuous. Even if you could construct it, it wouldn't be smart.

For small torus planets, the outlook is good, as long as we're not talking about serendipitous natural occurrence. Nature will probably find some other way to shed the angular momentum before it takes on the extreme shapes, because planet forming environments are extremely nasty. But if you're intentionally spinning up a planet, things should go exactly according to the evolution of shapes that the research already illustrates. The real question is - if it breaks up, what does it break up into? For a large torus, this is obvious (lots of tiny planets), but if the mass and angular momentum can barely support 2 separate bodies, then you should have a very robust global stability condition. Note that you can establish some conservative limits easily, but in reality, 2 closely orbiting tidally locked bodies is a very very difficult problem, since the tidal forces deform them. That becomes 3D, none of these nice 2D simplifications.

My intuitive answer is that such a torus would be unstable, because an increase in density at one point on the surface would accumulate ever more mass, thinning out the opposite site, by conservation of momentum moving towards the centre of mass until the planet would be a very eccentric (because of the angular momentum) oblate spheroid.

72
Why is the Earth so fat?
30
What nonlinear deformations will a fast rotating planet exhibit?
11
Tension in a curved charged wire (electrostatic force) - does wire thickness matter?

13
Two planets in same orbit - not planets?
37
Why don't planets have Circular orbits?
0
Could the recent evidence of a gravitational force orbiting the solar system indicate not the existence of a ninth planet, but rather a black hole?
0
Why are planets not torn apart?
1
Gravitation in a Toroidal Planet