Why is no EMF being induced in this ring passing through a magnetic field? 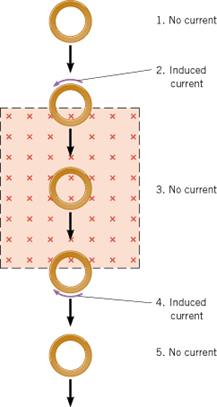 The book's logic is that there is no induced EMF because flux is constant as it passes through the magnetic field. Which makes sense, but this seems counter-intuitive to what I previously learned.

The force on each electron is $qv\times B$, which is toward the left. This clearly doesn't induce them to flow in a circle. (Remember that if electrons flow to the left, current flows to the right.)

The entire ring is not deflected to the right because there is an equal force on the nuclei toward the right.

There is an EMF induced in this ring!!

When an electron or proton move in a magnetic field, it doesn't matter if the field is constant or not (relative to all of the ring or cable or coil...etc), THERE WILL ALWAYS BE an EMF = Electro Motive Force acting upon the particles!

See faraday wheel, or homopolar generator: is it not strange that it does work, if you cover the whole surface of the disk with a magnetic field - no changing flux there (for example, a disk magnet with the same diameter), and what is more interesting, that it doesn't matter, if the field is moving together with the disk or not!!?).

What matter is that, where can the forced/accelerated particles go, what path do they have to move, how can you lead them to do work for you.

To understand better lets take it step by step, from the picture above:

Tip: Seems easy, but as you will realise the hardest part in this case (or in all the case with homopolar generators), is HOW to access this enermous current, with high speed motion (for a useful voltage). Changing magnetic flux was always easier to handle...well for a not too good trade-off. The answer for the EMFs for not killing each other in a changing magnetic field might be, cutting the ring in half (upper-lower) and connecting the lower part's left side to the upper part's right side and vice versa...

A muscle man pushing you forward in a free path would be an EMF. The same muscle head pushing you against another man, who gets pushed from the other direction with a geat force... i dont know, but i wouldn't say there is no force 'acting' upon you even though you can't move.. :) [all you have to do, to turn left or right, now there is two of you heading to the same direction with double force] (i don't really recommend a book to use it as any kind of learning reference, that lies to you and can't explain a simple thing like this)

In order to induce an EMF in a current loop, there must be a changing magnetic field.

You are correct in surmising that there would be a force on a moving charge in the presence of a magnetic field. This is known as the HALL EFFECT. If the ring were replaced by a current carrying wire running the length of the path of the ring, charges would most certainly be deflected (to the sides of the wire, as prescribed by the right hand rule).

But because there is no source of moving charges (or even an excess static charge) on the ring, the textbook is correct that the EMF induced while the loop is in a constant magnetic field would be zero.

Not the answer you're looking for? Browse other questions tagged electromagnetism electricity induction or ask your own question.