I put gunpowder and then a ball bearing in an old musket and fire the bullet.

Newton's 3rd law of motions states that "for every action there is an opposite and equal reaction". With that in mind, it shouldn’t really matter how I expelled the hunk of lead, would both systems react in the opposite direction the same at the moment of release? (I’m aware that the spinning system would have a torque while it was spinning, but lets ignore that)

The reason I’m asking that is; intuitively the ball bearing is desperate to escape the faster the disk is being spun. It would seem weird that it would suddenly kick the system backwards when it was already straining to leave the system the whole time. Also, there seems to be an intuitive difference because the expelling force in the spinning system is 90 degrees to the applied force.

If you were actually to do Scenario 2, the motor would indeed be flung backwards. This might seem a bit odd at first glance; if the ball bearing is moving already at the time of release, why would the motor be ejected backwards when it releases the bearing? 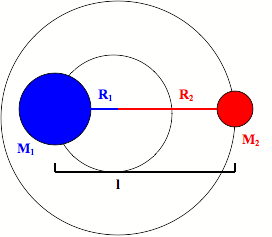 Both the motor and the bearing rotate about a pivot point. When the bearing is released (ie, the connecting line in the picture above is severed), it flies in one direction, and the motor flies in the opposite direction, in exact analogy to the musket scenario.

I avoided math in this answer because I figured an intuitive visual explanation was sufficient; other posters will probably give more details, if you want them.

When you fire a musket the gun powder explodes, and this explosion pushes on the ball bearing with a considerable amount of force. The ball bearing, in turn pushes back. You feel this sudden force pressing backward as a kick.

Not the answer you're looking for? Browse other questions tagged newtonian-mechanics centrifugal-force or ask your own question.

0
Does a spinning part affect the moment of inertia of a composite object?
2
What are the physics behind a table tennis ball launcher?
2
How do car wheels use friction to accelerate?
4
Practicality of a centrifugal space launch system
0
Spinning basketball on water surface--preferential axis
3
Torque due to friction on a series of disks
0
Flight time of spherical bullet fired horizontally versus dropped vertically / effect of crosswind on spherical car