Two clocks are located at either end of a two light-hour long pole and motionless relative to the pole. Each clock transmits its time and notes that the other clock shows a reading two hours behind its own. That is, the clocks can be considered synchronised with each other. There is a flashbulb at the midpoint of both clocks. It goes off, and when each clock sees it (one hour later), it starts accelerating toward the other and each at the same rate (applying the same amount of thrust for the same local time). They do this for a short time until reaching a steady speed of 0.4c, relative to the flashbulb. Now according to the most recent generation of relativity experts, each clock should observe the other running more slowly. This needs to be the case because time dilation is based on the square of velocity so direction of travel is unimportant.
As they approach each other, the observed time difference will reduce because it takes less time for the transmitted signal to arrive. But the observed clock rate (after adjusting for doppler shift) will be slower at all times. By logical extension then, when they finally pass alongside or stop adjacent to each other, each clock should observe the timestamp of the other clock to be less than its own. Now obviously that outcome can’t be acceptable. Therefore we must conclude that any time dilation observed during their passage is nothing other than an illusion, and certainly not ‘real’ according to any experimental measurement, since only the final side-by-side comparison counts. It goes without saying then that if the clocks were instead moving apart from each other then any observed time dilation must also be an illusion.

In the reference frame of the flash bulb, the other two clocks are always synchronized since those clocks have, at all times, the same speed as each other.

If you trace the wordline of the two accelerated clocks (in the frame of the flash-bulb), you'll find they are congruent and so, the proper time along the worldlines is the same.

Also (and again, this is plain to see on a spacetime diagram), while it is true that each moving clock observes the other to be running slow, there is also a time offset that is just such that the two clocks will read the same when they meet at the center.

This is easiest to see in the case that the acceleration to $0.4 c$ is instantaneous.

Before the acceleration, the clocks are in the same reference frame and are synchronized.

The moment after the acceleration, the clocks are in different reference frames and each clock observes the other to be ahead in time, i.e., to read a later time.

Therefore we must conclude that any time dilation observed during their passage is nothing other than an illusion, 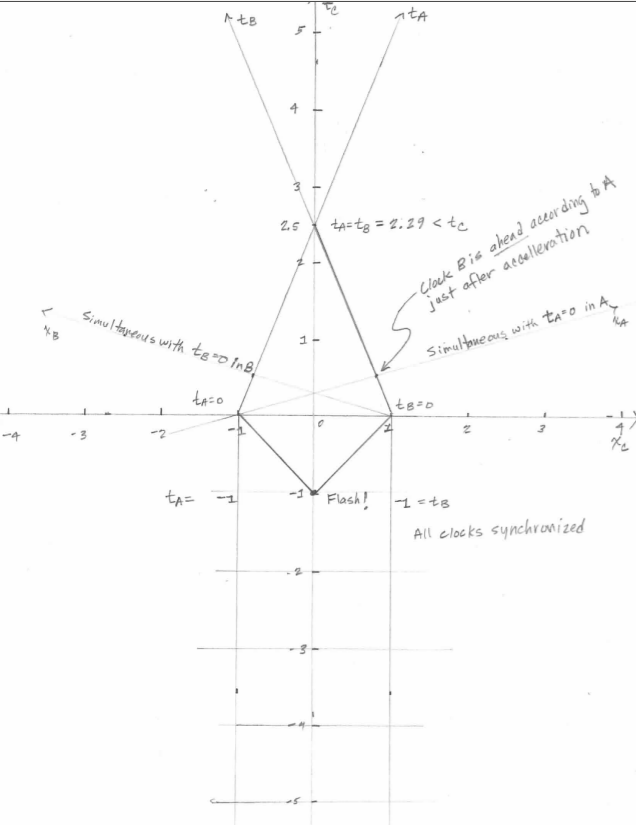 So you are saying that each clock sees a value of time ahead of the transmitted signal.

No, that's not what I'm saying. I assume you're unfamiliar with spacetime diagrams and lines of simultaneity. When I say "each clock observes the other to be ahead in time", I mean "observe" as it understood in the context of Special Relativity. From the Wikipedia article "Observer (Special Relativity)":

Physicists use the term "observer" as shorthand for a specific reference frame from which a set of objects or events is being measured. Speaking of an observer in special relativity is not specifically hypothesizing an individual person who is experiencing events, but rather it is a particular mathematical context which objects and events are to be evaluated from.

This distinction between observer and the observer's "apparatus" like coordinate systems, measurement tools etc. was dropped by many later writers, and today it is common to find the term "observer" used to imply an observer's associated coordinate system (usually assumed to be a coordinate lattice constructed from an orthonormal right-handed set of spacelike vectors perpendicular to a timelike vector...

In the spacetime diagram above, I drew the x axis for the flash bulb reference frames as well as the two clocks the moment after the acceleration. Recall that, all events along the x axis have time coordinate zero in their respective reference frames.

Thus, it is easy to see that, in A's reference frame (coordinate system), clock B reads a positive value simultaneous with clock A reading $0$.

This is a twin paradox in disguise. Suppose you rearrange your experiment slightly to have the two observers start at the same place but travelling in opposite directions, then they slow to a halt and accelerate back towards each other and pass each other at the starting point. The problem is that if they synchronise their clocks at the start how can they both be showing the same time when they meet for the second time? (Your experiment is one half of this.) This problem is dealt with in the question Why isn't the symmetric twin paradox a paradox?.

The resolution is that you cannot just consider the portion of the flight that is at constant speed or you will indeed end up with a paradoxical result. You need to consider the acceleration phase and the acceleration affects the proper time of the observers. If observer $A$ is calculating the time on $B$'s clock then $A$ will calculate $B$'s clock to be running slower during the coasting phase but faster during the accelerating phase. The two effects will cancel out and averaged over the whole trip both clocks will have run at the same rate.

9
Why isn't the symmetric twin paradox a paradox?