There's a closely related question: binding energy of a nucleus is positive?

Imagine taking the nucleus and pulling it apart into individual protons and neutrons. To do this you have to put in energy, and the amount of energy you put in is equal to the binding energy - call this $E_0$. Now let the individual protons and neutrons come together again to form the daughter nuclei (and free neutrons). As the question I linked explains, to form the daughter nuclei you have to take energy out, and the amount of energy you take out is the sum of the binding energies of the two daughter nuclei - call these $E_1$ and $E_2$.

When you say the binding energy of the products is higher what this means is:

So in our notional process of pulling the nucleus apart and letting it reform, we end up getting energy out i.e. the fission process produces energy (typically as kinetic energy of the reaction products).

As for the masses, when we separated the original nucleus we had to add an energy $E_0$, so the mass of the separated nucleons is more than the original nucleus by an amount $E_0/c^2$. When we let the nucleons recombine into the daughter nuclei we get energy out so the mass of the products is less than the separated nucleons by an amount $(E_1 + E_2)/c^2$. Because $E_1 + E_2 > E_0$ overall the mass has decreased giving us the mass deficit. The mass deficit is just the amount of energy released in fission divided by $c^2$.

I am an A-Level physics student. While revising I had the same question and after reading the other answers and lots of thinking I´ve come to a conclusion. Probably you as I did are thinking that binding energy is the energy used to sustain the bonds in a nucleus but it is not. Rather binding energy is an indicator of how efficient the bonds within a nucleus are, as there can be really strong bonds that require little energy. Atoms with a higher binding energy are more stable and therefore require less energy to form, allowing them to emit it. This is very well shown by the graph posted by @John Rennie. 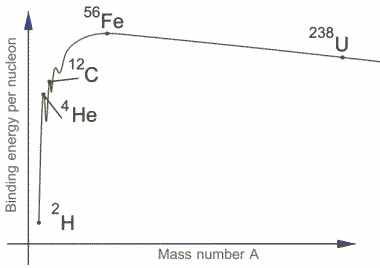 This efficiency I am talking about has to do with how the atom is structured. As seen in the graph from hydrogen up to iron the binding energy per nucleon increases because you can fit protons and neutrons in a very compact manner which makes the strong nuclear force to increase faster than the electrostatic repulsion. However, in elements with a higher mass number than iron the electromagnetic force will begin to take over as the nucleus becomes too big for the strong force to be effective, thus reducing their binding energy (Fun fact: In heavy elements atoms have more neutrons than protons because this helps increase the distance between them, thus reducing the electrostatic repulsion). This results in many elements with a higher mass number than iron being radioactive because they are unstable and seek a better configuration. This is very well explained in this video: https://www.youtube.com/watch?v=mpDDQ4uEH6M

1
What is the relationship between binding energy, energy released, and mass defect?
7
Binding energy of a nucleus is positive?
0
To what does energy belong in an energy diagram?