Why is the moment of inertia (wrt. the center) for a hollow sphere higher than a solid sphere (with same radius and mass)?

Why is the moment of inertia (wrt. the center) for a hollow sphere higher than a solid sphere (with same radius and mass)? I have completely no idea and I am inquiring about this as it is an interesting question that popped in my head while doing physics homework.

A hollow sphere will have a much larger moment of inertia than a uniform sphere of the same size and the same mass.

If this seems counterintuitive, you probably carry a mental image of creating the hollow sphere by removing internal mass from the uniform sphere. This is an incorrect image, as such a process would create a hollow sphere of much lighter mass than the uniform sphere. The correct mental model corresponds to moving internal mass to the surface of the sphere.

The key is... the closer the mass to the axis of rotation, the easier it is to add angular velocity to the body.

For instance a figure skater rotates faster when she puts her limbs closer to her body. 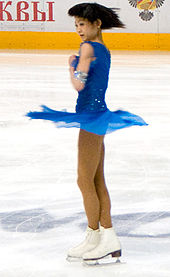 Let's see how it works in a more intuitive fashion:

For instance, in the figure bellow, trying to lift up table (A) would be easier than table (B).

In both cases the mass of each individual box is the same, but in (A) you have a better lever because of the distance from the border where the force is being applied, to each box.

Therefore, table (B) would be harder to lift up, even when R (length of the table) and M (total mass of the four boxes) are the same. 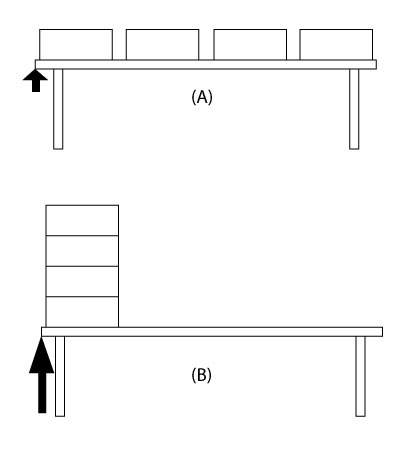 Now let's see how it works in the case with the spheres:

Both spheres, the solid and hollow one, rotate around their center of mass in the same way that the table rotates around the legs at the opposite side to where the force is being applied. 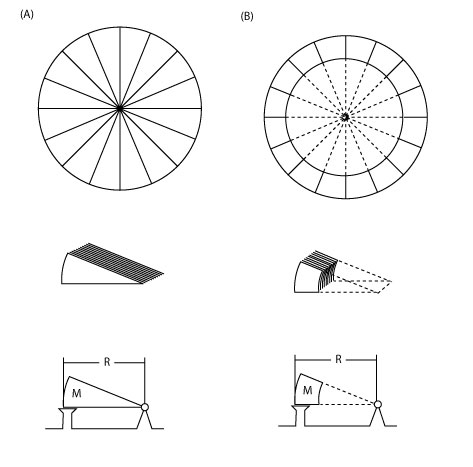 To make sense of step 2, where the mass of the all pieces is collapsed, think on a Merry-Go-Round where all the kids move to one side keeping their distance to the axis of rotation fixed.

Here's an illustration of a uniform sphere and a hollow sphere mid-sections with the same mass, if you better understand these things visually: 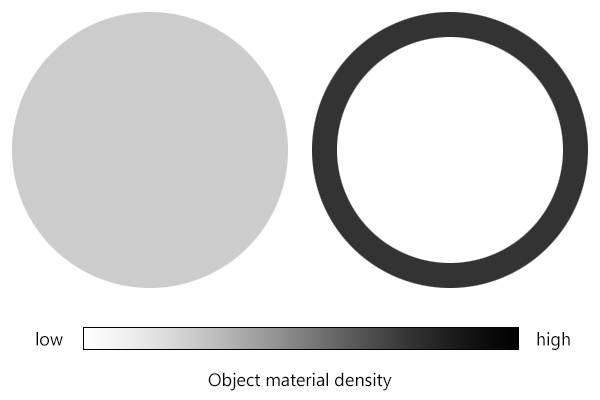 The moment of inertia of a body about an axis is a measure of how far the mass is distributed from that point. For a solid sphere of mass $m$, radius $r$, you have the mass distributed continuously from the center to the radius. However, for a hollow sphere of mass $m$, inner radius $r_i$ and outer radius the same as before, $r$, you have all the mass slightly farther from the center.

Since the entire mass is farther from the center, it is harder to change its angular momentum, and its moment of inertia is larger

The moment of inertia of a hollow sphere would be higher than a solid sphere of equal radius, only if the unmentioned assumption (same mass) is true! This is typically untrue, because of another assumption, that the hollow and solid spheres (of equal radius) are made of the same density material.

The question is not why - that is misleading. It is when as under certain conditions only is this true. The moment of inertia is proportional to the mass and distribution of that mass about the axis.

If you consider the sphere as two hemispheres, then the centre of gravity of each is 3/8r from the centre. (http://my.safaribooksonline.com/book/mechanical-engineering/9789332503489/6-centroid-and-moment-of-inertia/chap6_sub14_xhtml) The hollow sphere, when considered as two thin shelled hollow hemispheres has a c. of g. at r/2 from the centre. http://my.safaribooksonline.com/book/mechanical-engineering/9789332503489/6-centroid-and-moment-of-inertia/chap6_sub15_xhtml Hence if they are the same size and mass (and therefore a more dense material for the hollow body), the hollow hemispheres have their effective mass further from the fulcrum.

1
Is it always true that a solid object(geometrical figure) has less moment of inertia than its corresponding hollow one?

1
Double Compound Pendulum: why use inertia about the center of mass for bottom pendulum?
0
Why is moment of inertia for a point same as a ring
2
Why do vehicles with a higher center of mass roll more easily considering that they have a higher moment of inertia?
0
Rolling race where objects roll with slipping
3
Calculation of Moment of inertia by exploiting the fact that it only depends upon the distribution of mass with respect to the principal axis
0
Question on the proof of Moment of Inertia for a solid sphere